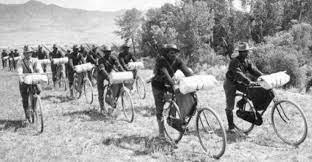 It was literally one of the two or three most exhausting days I ever had on a bicycle tour.  It was my first mountain tour and the first day we went from Snowmass, CO to Leadville CO over Independence Pass, an elevation of about 12,400 feet.  The tour took place in mid-June.  I had been training in Fargo, ND, elevation about 900 feet, since mid-May which has no mountain passes. In fact, my elevation training consisting of riding over the walking bridge on the Red River, again of 2-3 feet.  Turns out that will not get one in shape for a mountain tour.

Of 2,000+ riders, I was literally one of the slowest.  The only person I remember passing was a guy with a sign on the back of his bike saying "Hi, I am 77, how are you doing?".  At that point, the only part of my body that did not hurt was my ear lobes.

I thought about this when I first learned about a group of Buffalo Soldiers, part of the 25th Infantry Bicycle Corps, who rode from Ft. Missoula, MT to St. Louis, MO. in 1897.  Yes, 1897.  The late 1800s was the first heyday for bicycles and this was a training exercise sponsored by the US Army to determine if the bicycle would be a more efficient form of transportation than horses.

On June 14th, 1897, Lieutenant James Moss led 20 Buffalo Soldiers along with a doctor and journalist on the epic ride of almost 2,000 miles.  They rode Spaulding military bikes which weighed about 32 lbs.  In addition, they carried all their own gear including carbines, around 40 lbs per rider.  Greeted by crowds, they arrived in St. Louis 41 days later averaging 56 miles per day.  The St. Louis Star wrote that it was ‘the most marvelous cycling trip in the history of the wheel and the most rapid military march on record".

They traveled on the most primitive roads one could imagine dealing with heat, cold, rain, mud, grime, and slime. They carried their bikes and gear across rivers.  Their entire journey with pictures is detailed in the book "Iron Riders: Story of the 1890s Fort Missoula Buffalo Soldier Bicycle Corps" written by  George Niels Sorensen.

For those of you who do not know, Buffalo Soldiers is the name Native American tribes assigned to six all-Black cavalry and infantry regiments which were created in 1866 by Congress.  Their purpose was to protect settlers and travelers in the West and of course, fight in the Indian Wars.

This is one of the most amazing journeys of which I have ever heard.  I have ridden both my road bike and my mountain bike in the mountains and on prairie roads and trails.  When I biked the almost 70 miles from Snowmass to Leadville, I was on a 27-speed touring bike carrying some small snacks, but knowing there were organized rest stops with snacks, water, and sports drinks, and the road was paved.  Did I mention we had sag wagons carried our gear?

For the purists, out there who have done self-contained tours, so have I.  Years ago I biked the coast of Oregon self-contained. Generally, after the first 10-15 miles I would stop and McDonald's for breakfast.

There was no Mcdonald's in 1897.  But there was racism.  The Civil War had only ended 32 years previously.  Jim Crow laws, which existed for about 100 years starting shortly after the  Civil War until Congress ended them in 1968. Jim Crow laws were a form of legalized segregation denying Black Americans the right to vote, hold jobs, get an education to name a few.  In addition, the lynching of Black Americans was a common, often public event.  It estimated almost 5,000 Black Americans were lynched during this time period. Recently, there has been publicity of the 1921 Tulsa Race Massacre where a  prosperous Black neighborhood in Tulsa was attacked by white mobs killing over 300 Black residents and burning over 1,000 homes.  Sadly, this was not the only example of white mobs attacking black neighborhoods in the early 1900s.

All of the above historical events were often whitewashed in US history, no pun intended.  [Ok, some pun intended.]

When I did my first mountain tour, my butt hurt.  The Buffalo Soldiers in addition to biking in some of the most primitive extreme conditions possible, had to worry about being attacked by white mobs as they road from one community to the next.

Recently, we as a country established June 19th as a National Holiday.  It recognizes the end of slavery in 1925.  This was appropriate and long overdue.   We as a country need to celebrate extraordinary achievements like the Buffalo Soldiers' epic trip from Ft. Missoula to St. Louis.  We also need to acknowledge, understand and empathize first with the inhumanity of slavery before the Civil War and then the brutality of racist behavior and violence on Black Americans by parts of the white community since the end of the Civil War.

Most of us have achievements of which we are proud.  We also have either done stuff ourselves or watched others do things that we regret or of which we are not proud.  We need to celebrate the first and acknowledge the second and make sure it does not happen again.  This is true for individuals and societies.