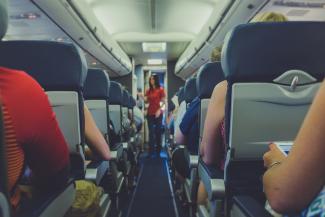 It is expected that over 47 million people will fly on US Airlines over the Holiday Season with an average of about 2.6 million per day.  My family will include four separate groups of travelers by air converging on Portland, Oregon from four different airports.

I am a fairly experienced airline traveler with a significant amount of flights primary for business but also for the family over the last fifteen plus years.  I have learned a few things over the years.

Airlines are often late.  About 40% of flights arrive after their scheduled arrival time.  The airline industry actually publishes a lower rate of late arrivals, but define late as being at the gate within fifteen minutes of the published arrival date.  There are many reasons for being late including weather and mechanical problems to name two.  There is always a reason for this, but it is not the gate agent or customer service agent's fault.  Nor the flight attendant or the pilot.  None of these individuals control either the weather or mechanical issues.

I do not remember the case of any airline staff member being rude to a customer.  I have often watched customers be rude to airline staff.  Each time I have noticed this, I try to apologize to the staff member on behalf of the rest of the human race.

If a traveler has a problem with staff members, I would suggest the following process.  If possible, tell another staff member. Write or email the company detailing the situation.  And of course, in today's world, social media is an instant means of making a public complaint.

But keep in mind, with the number of flights which take place every day and all the various airline staff which make it possible, I am guessing 99% of the staff do their jobs to the best of their ability and treat customers with courtesy and respect.  Travelers should do the same.

I head a great story a while back.  A lady was talking to a baggage agent regarding her baggage which was had not show up at the baggage claim.  An older gentleman came up and starting yelling at the agent about his lost luggage. She turned to the man and said, "sir, I am having a nice conversation with this person, please wait your turn".   When she was done, she recognized the gentleman as a well-known actor and walked up to him and said: "you're better than that" and walked away.

Recently, I flew from Tucson to Minneapolis the day before Thanksgiving to celebrate the Holiday with family.  My flight was delayed due to severe winter weather in Minnesota.  Also, a direct flight was changed to flying through Salt Lake City because the original crew had reached their maximum flight time.  The airline brought in a new crew from Minneapolis, Atlanta and crew in SLC who thought their day was over but ended up spending hours in the airport waiting for our flight so they could work one more shift.  Some passengers were frustrated, but I thanked all the current staff and new staff in SLC for making it possible for me to reach my destination.  The airline could have simply canceled the flight, but instead, the staff worked very hard to make it possible for all of us to reach our destination.

If you are flying over the Holidays, please extend your Holiday good cheer to the airline staff.  Almost all are working very to make your travel safe, comfortable and hopefully on time.  If not on time, in most cases the staff with whom you are working are trying to help you and had nothing to do with the delay.