Alaska - Part 1, Getting There 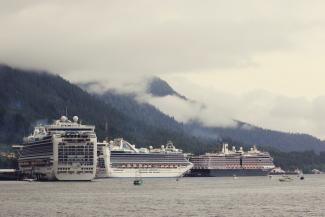 Alaska - Part 1, Getting There

Kim and I recently completed a tour of Alaska.  It’s been a goal of ours to visit Alaska for a while so time to get it done.  The tour included a combination of taxis, a cruise ship, a train ride, multiple bus rides, a small boat, a couple of Ubers, a lot of hiking and one bike ride.  This addresses the first part of the tour which was getting ready and getting there.

Signing Up:  Kim had done research on the type of cruise that would be best for us and she did an excellent job.  We used American Express as our travel agent, in part because I wanted to use my American Express points to pay a portion of the costs.  There is a reason for this.  A few years ago a good friend of mine died suddenly in a freak accident.  After his death, I realized that if I were to die in the near future, Kim would use my points, which I had earned over many years of hard work, with some jerk who she probably met online on some weird dating app.  So back then I immediately booked a trip to Hawaii and used all my points.  Since my points had built up again, I thought time to use them.

By the way, prior to booking this trip, Kim had told me if I died she would use my points to take a trip with her sister.  This is either because I had set the bar so high I was impossible to replace or the opposite.  I am afraid to ask her which is true.  In any case, though her sister is a very nice person, I saw no reason she should use my points so off we go.

Packing:  Our daughter-in-law was born and raised in Juneau, Alaska so texted her while packing as to what to bring. Specifically, I asked her if we should pack dishes, silverware and tp for when off the ship  She assured us that most places in Alaska have these life essentials and the ones we visited did.

Emergency Contact:  Since we are each other's emergency contacts, this was a tough decision.  The obvious choice would be one of our children.  However, since they are both very busy working in the firm they own together, raising children and being good spouses, they rarely return phone calls from us.  A phone call from a number they do not recognize probably would not get answered.  We were afraid that if something happened to us, they may not notice until Thanksgiving when talking on the phone and they realize we are not at either of their houses.  We finally decided to use the "lost and found" department at the church Kim attends.

Religion & Taxi:  One of the things I enjoy most about travel is riding in a taxi.  Often the drivers are very interesting immigrants with unique stories.  Many represent the best of humanity.  I have had taxi drivers from all over the world and the majority have been hard-working, family-driven, and passionate about freedom, capitalism, and democracy. Our taxi driver from the airport in Vancouver, BC to our downtown hotel was no exception.  He was from India, had been in Canada for 12 years arriving with his parents and siblings.  He was in his late 30’s and worked very hard to support his wife and children.

He was also of the Sikh faith.  I know very little about the Sikh faith, but what I do know is it is a very peaceful loving meditative faith.  By world religion standards, it is relatively new and members have been often persecuted by members of other religions, often because of their world view and peaceful intentions.

It is also a patriarchal society.  The driver and his family live in the same house as his parents along with a brother and his family.  His father, as the patriarch of the family, rules the family, controls the finances and makes all the final decisions.  My wife and I briefly discussed if we should adopt the same philosophy living in one house with our children, their spouses, and grandchildren.  We quickly decided this was not a good idea.  It was immediately clear to me if this were to happen, there would be a revolt and my life expectancy would decrease from years to weeks, maybe days.  I do think it would be a good idea if they sent me all their money and after deducting a modest management fee along with other expenses I would dole out the rest as needed.

Getting on the Cruise Ship:  Since our hotel was less than a mile from the cruise ship docking we walked there.  It was pretty cool walking through downtown Vancouver wearing backpacks and pull two large suitcases. As one might imagine, it was downhill most of the way.  Rarely does one walk uphill to get to the ocean.

I have thought a lot about all the economic activity it had taken just to get to this point.  Travel agents, taxis, hotels, restaurants, airplane rides, etc.  And the adventure was yet to start.