The alternative to birthday's is not good. 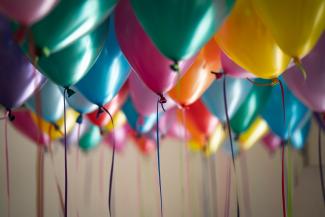 The alternative to birthday's is not good.

I have a birthday coming up.  It is not a milestone birthday but it does mean I am still around.  I learned a long time ago, the alternative to getting older is not good.

Frankly, I am surprised to still be having birthdays.  Though I am often told I look like a Greek God.  Ok, actually no one has ever said that to me.   I have been told I look like Greek yogurt, the white lumpy kind that has been in the refrigerator too long.

The reality is I was told twenty plus years ago I had a fifty-fifty chance of kidney failure.  I realized I had a problem when I gained 13 pounds one night.  Turns out that is a lot.  My family, every supportive called me puffy daddy for months.   So, having a birthday has always been a good thing.

I have a little ways to go to start another decade, so just in case I do not make it, I thought it appropriate to highlight the decades so far.

First Decade: Frankly, I do not remember much about the start of my first decade. I was told I was born tall dark and handsome.  Sadly, there are no pictures and it did not last.

Second Decade:  When I turned 10 my mother had just taken her first teaching job in a small town in West Central Minnesota and I was beginning 5th grade.  The teacher retired after that year. I like to think this was the beginning of my career as a financial planner helping people plan and transition to retirement.  My mom later told me I was considered to be one of the four most difficult kids in the entire school.  I have always wondered if this type of achievement belongs on a resume.

Third Decade:  When I turned 20, I was getting ready to start my junior year in college and worked four jobs that summer and almost full-time during the school year.  I made enough to pay for the entire year, tuition, room, and board at a small private liberal arts college in Minnesota. Today, I would have to make over $53,000 to do the same. Anybody my age who thinks that it was harder back in the day for us then students today should see a medical professional for health issues.  I also started listening to classic rock.  Of course, then it was not classic, just rock music.

Fourth Decade:  When I turned 30 I was a complete and total failure.  I had recently become self-employed and was making every possible mistake.  My daughter was born shortly after I turned 30.   A couple of years later and after watching me make multiple mistakes she gave me the most motivating talk I have ever heard.  She told me I was lazy, a screwup and I had to get my stuff [she used a different word] together and make living for her as she could not do so for herself.  It was shortly after that, I started my firm which I later sold at the end of 2016.  I realized I had two purposes in life, make a living for my family, and be the best I could possibly be at my chosen profession.

Fifth Decade:  When I turned 40 my little firm was growing and I was working an average of 50-70 hours per week.  I had two kids and one wife which, I am pretty sure is the legal limit in North Dakota.  For those younger, kids are wonderful, but they also are expensive and the more they learn to talk, the more they talk back.  Some may think there was payback there.

When I turned 60, I bicycled across the US.  My motto was just like Fargo.  We had riders from all over the US and several countries and every time we had a rest stop at a scenic area, I would yell out "just like Fargo".  By the end of the tour, all wanted to visit Fargo for its scenic and diversified beauty.  This was an early example of fake news and alternative facts.

I have over a year to go to start another decade but will make a prediction.  I believe we as a country will be much better in my next decade.  We have just received a very harsh lesson in the costs of bad economics and not having a coordinated comprehensive long-term health care plan. We will learn from this, especially our younger generations.  I hope I can hang around for the whole decade because the group coming up is going to do amazing things.