Be A Kind Air Traveler 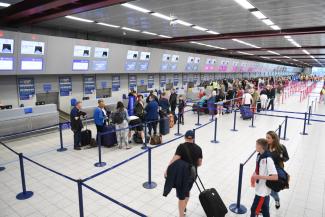 Be A Kind Air Traveler

A story recently went viral about a US Senator apparently throwing a hissyfit at the Bozeman Airport when he missed his flight and was difficulty rebooking to a new flight  His antics required the attention of the Airport Public Safety Officer.  I have read several  guesses as to why he was upset.

I have flown thru the Bozeman airport multiple times and watched some interesting scenarios.

A few years ago, I was at the airport at the suggested time before my 7:00 am flight.  Since the airport was still pretty quite I was walking from one end to the other and back a few times.  I was at the one end as a flight had finished boarding, closed the door and was getting ready to pull out when this lady comes running down the corridor screaming "no, no, no".  Seeing the ticket counter was closed and service representatives had moved to a different part of the airport, she started running the other way still yelling "no, no, no".  I am guessing in times of stress, her vocabulary is somewhat limited.  Anyway, when I got to the other end she was yelling at the customer service representative at another gate.  The representative kept calming explaining to her that being on time is before the boarding door is closed, not when the flight is scheduled to leave the airport.  The representative said they would find another flight for her if she calmed down and stopped yelling.  Eventually two security agents came over and stood next to her and she did calm down.  I am guessing she finally got to her destination, in part I suspect because no one at the airport wanted her to stay a second longer than necessary.  I wonder if she was from Texas.

That same morning, I was waiting to Board when a couple emerged from security with a a women screaming at her husband/partner "you do this every **** time.  You make us leave late so we barely make the flight and this time you made us too late."  She took a breath and started yelling again.  Fortunately, the customer service agent who was about to close the gate door saw, actually heard them, and left it open so they could get on the flight.  I suspect part of the reason was no one wanted hear her scream at him until they could get on another flight.  And I am guessing her anger was justified.

There a lot of travelers by air who think it cool to show up late to the airport, push thru security and get to the gate as boarding is taking place.  This makes zero sense to me.  I have flown enough to know that even when at the airport at the suggested time, there are often things that can go wrong which make it a race to get to the gate before boarding is over.

I have always felt I have enough stress in my life without trying to add more by cutting it close when trying to make a flight.  Besides, I have always liked hanging out in airports. They have food, coffee and other beverages, and if you look around enough, you can normally find a quiet place work, read, or simply kick back.  Finally, if I had to choose between watching exotic animals in a zoo or watching some of my exotic fellow travelers, it would be a tough choice.

Recently while boarding a flight during the pandemic, the guy behind me was calling our customer service agent a naughty word that starts with B and rhymes with itch.  I thought about asking him if expected her to lose her job rather than ask him to wear a mandatory mask.  I did not because I have noticed white guys who do this typically measure their intelligence with a small teaspoon.  Also, I thought he might take a swing at me.  Though I have not been in a fight since elementary school, I was pretty sure I could take him.  Sexist guys like him are only brave when muttering under their breath or posting hate items anonymously.  But I decided against it just in case he made a scene which would delay boarding.  I suspect he was from Texas.

What is the point of all the above.  Air travel is a cornerstone of our economy, both for work and vacation.  It is important for all of us to be kind courteous travelers.  Most of the time, we can choose to get to the airport at the suggested time, be relaxed as we check in, go thru security and get to our gates.  We can choose to treat all airport workers with courtesy and respect.  Without them, no is going anywhere.  As outlined above, there are always a few jerks.  Make up for them by be extra nice.  Not only will make their day better, but yours.