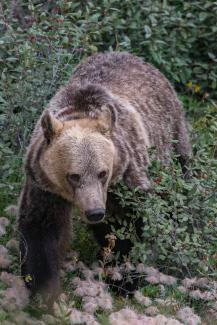 The first time I went mountain biking was in Big Sky, MT.  We had rented a place and my son, his friend and myself rented mountain bikes from a local sporting goods shop.  The employee who helped us suggested we buy bear pepper spray.  I thought we would not need it as we were only going to be in Big Sky for a week.

A few months later we bought a condo in Big Sky and I begin learning about grizzly bears and the dangers of encountering one on the trails, be it hiking or mountain biking.  As all locals know, bear encounters are rare, but they do happen and can lead to serious injury and very rarely death.

With a little more knowledge, I realized I had been stupid before in not buying bear pepper spray, not the first time and certainly not the last, but I learned and purchased a canister.

I read the directions, and as I recall, they went something like this.

Encountering a bear in the wilderness is rare, but does happen.  If it does happen, do not disturb or startle the bear and slowly back away.  Ok, that makes sense.

Then the directions said something like if the bear becomes aggressive and charges you must first determine if the bear is a grizzly or a black bear.  A black bear is likely to be a bluff charge while a grizzly keeps coming.  I am thinking, if I have a couple of seconds to determine if the bear is a black bear or grizzly bear, I am in trouble.  It takes me at least 10 seconds to figure out who I am when looking in the mirror.  Do bears know this and are they willing to take a time out so I can figure it out?  Yo bear, are you a black or grizzly bear?

If the bear keeps coming the directions suggest determining the direction and speed of the wind.  If the wind is behind you, the range of the bear spray is longer then if in your face.  Ok, again is the bear willing to take a quick time out so I can hold a finger up to check the wind?  And what happens if I accidentally hold up the wrong finger, will the bear be offended?  Again, a time-out would be nice.

The next part of the directions discusses using the spray while camping.  If a bear comes into your camping area, first make a lot of noise, and hopefully, the bear will go away.  If the bear does not go away, use the pepper spray.

Then it says, if the bear comes into your tent, this is probably the worst-case scenario.  Yep, I agree with this.  Pretty sure the only thing worse than having an angry hungry bear in the tent is having one that is sad, lonely, and wants to cuddle.

I did review some research on pepper spray versus carrying a firearm.  Most everything I read indicated pepper spray offers more protection for a variety of reasons.  Do not take my word for it, do you own due diligence.

A few days ago while in Big Sky, my wife and I did walk down to Ousel Falls around noon, a very popular and short hike.  As usual, the trail was busy with locals and tourists.  I did notice one gentleman carrying a small pistol.  Since he had no law enforcement identification, I assumed was a tourist.  I also assumed he was carrying the weapon for personal protection.  Since it is unlikely to be mugged on the Ousel Falls trail at noon with lots of other visitors around, I guessed the pistol was not for protection from muggers.  If it was protection from grizzlies, though bears have been known to be in the area, the chances of running into a grizzly at noon with a steady string of people coming and going would be one degree away from totally remote.  However, if a grizzly were to be there and charge, the gentleman's only hope was the bear would see the size of the pistol and get the giggles and fall on its back laughing.

In Big Sky, being either as local or tourist, the reality is the chances of you running into grizzly bear hiking or biking are remote.  The chances of at least one person or group running into a grizzly bear over the course of the hiking/biking year is probably 100%.  For all of us, this means, being prudent.  Even though the risk is low, it does not mean one does plan for it.  I was dumb the first time in Big Sky when I did not buy bear pepper spray.

In bear country, when one goes hiking, biking fly fishing, or any other outdoor activity that does not involve walking from your car into your house, you are making a risk/reward decision.  We all know the rewards, one risk is encountering a bear, there are many more.  All of us need to be informed, educated, and then responsible for our choices.  This is applicable to all other parts of life.