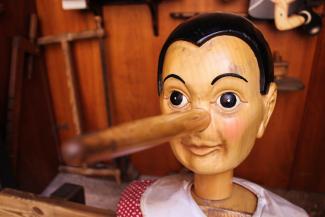 I know I do white lies.  For example, more than once I had said to someone that is a very interesting perspective, thank you for sharing when I really thinking, that is the one of dumbest things I have ever heard.  I am sure lots of people think the same thing when talking to me.  Though most often, what I generate is boredom, because as it turns out, I am pretty boring.

There is a difference between white lies and outright lies.  In the Old Testament, outright lies are called "bearing false witness" and are part of the Ten Commandments.   When Moses brought the Commandments down from the mountain, probably sometime around 1250 BC, they were said to be on a stone tablet.  Since stone tablets are difficult to copy not to mention heavy to carry, so the Commandments were passed on through oral tradition and not actually written down until hundreds of years later.  From oral tradition to written word, the intent never changed, "do not lie".

Our society, like every other one, struggles with truth and many today have taken bearing false witness to an art form.  Terms like fake news and alternative facts are simply ways of lying.

With the ongoing tragedy of Putin's invasion of Ukraine, it is pretty easy for most of us to acknowledge the lies coming from Putin and Russia.  Putin said things like the invasion was for peace keeping, or combat Nazism to name two.  Using government propaganda, he has continually lied to the Russian people about the war, though many Russians dissented, like the brave female broadcaster who protested the war on live TV and was later arrested.

But what about our own country's lies to ourselves.  I would suggest that many in our country are promoting or at a minimum holding their noses and looking the other regarding three outright lies.

None of the above are political opinions.  They are lies.  The individuals, media sources, and political groups who are perpetuating them are bearing false witness.   To support them in anyway is to condone and accept lies.

One last thought, if you think the above are harmless white lies, think again.  Look at the human, social and economic costs to first to the people in Ukraine, then many of the people in Russia, and finally throughout the world including the US.  There is a reason thou shall not bear false witness is in the Commandments.