Bison selfies, not a good idea. 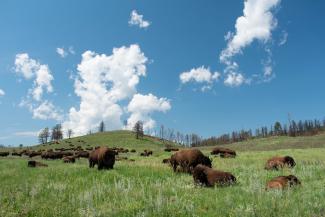 Bison selfies, not a good idea.

A tourist tells his/her friends, “I am going to take a selfie standing next to a bison”.  What could possibly go wrong?

Every year, there are multiple stories about visitors to Yellowstone National Park along with other National Parks getting to close to a herd or even single bison, being chased, often injured, and very rarely killed.  To my knowledge, no bison have been injured in these events.

When we hear about these events, I think most of us wonder how many leaves are missing from the top of these people's personal trees to make them think this could be a good idea.

One of many reasons it is a bad idea is the bison may be in a bad mood anyway.  Let's say two bison, names are Bob and Ted are standing by themselves, minding their own business, eating some grass.  The reason they are in a bad mood is the previous year they were BBOC with lots of female companionship.  Then, the younger stronger males kick them out of the herd.  Now they are grazing, lonely, and hear some chucklehead tells his/her friends he/she is going to take a selfie next to the buffalo.

I have a healthy respect for bison.  Bison are wild animals, they can weigh over 2,000 pounds, exceed 6 feet in height, 12 feet in length, jump 6 feet vertically and run up to 40 mph.  It is really hard to believe anyone thinks it is a good idea to ask a bison to pose for a picture.

I have bicycled the South Park multiple times.  It is 37 miles including a 23-mile loop and for a road cyclist, there is nothing better.  Almost all the time, I have run into bison who are on or next to the road.  In each case, trying to not to be on the next episode of "Funniest Home Videos", I wait for a vehicle to escort me by the bison with the vehicle between myself and the bison.

Frankly, I am very thankful bison still exist.  Before going any farther, when is the last time you saw a passenger pigeon?  The answer is never.  They went from literally millions, some say billions, in the early 1800s to be extinct in about 50 years due to overhunting and loss of habitat.    The extinction of the passenger pigeon is a tragic event in our history and should be understood by all Americans.

So, skip forward to the bison.   There were millions upon millions of bison in North America ranging from the Ohio Valley in East, to Mexico in the South and Canada in the North.  Minimally there were over 30 million bison in North America and some estimates approach 60 million.  By the 1830s, all bison east of the Mississippi had been exterminated.  By 1890, roughly 1,000 bison or less remained including about two dozen in Yellowstone National Park.

Bison were killed for sport, for their hides for which a substantial market developed beginning in 1871, to clear the plains for settlers, and finally and perhaps most important to control and ultimately end the Native American Plains tribes lifestyle. Native Americans used the bison for food, clothing, shelter, tools, and ceremonies.  With the almost extermination of the bison, the ability of the Plains tribes to survive also ended.

So, when I see bison in the National Parks, I am always thankful they still exist.  They could have easily gone the way of the passenger pigeon.  I am also thankful for government agencies and nonprofit groups which enabled and continue to help the bison survive along with many other species that are endangered.  .

Finally, if our bison friends, Bob and Ted, decide to head butt some joker who wants to take a selfie with them into a different time zone, I assume it is payback for almost being exterminated due to ignorance, greed, and selfishness.  Bison, along with other animal species native to North America are National treasures and they along with our National Parks and our public lands should and need to be protected for us and by us for all future generations.