Blind men, an elephant, and Portland, OR 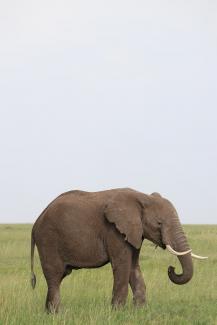 Blind men, an elephant, and Portland, OR

When I tell stories to my granddaughters, one of the favorites is the fable that originated in India.  It is the story of a group of blind men who went to visit an elephant that had been brought to town.  They had heard of this strange creature but knew nothing about it.   Standing by the elephant, they decided to inspect by touch to understand it better. The blind man whose hand landed on the trunk said it is like a thick snake.  A second whose hand reached its ear said it was like a fan. A third whose hand was upon its leg described as a tree-trunk.  Another touched its side said is a wall. One felt its tail said it is a rope. The last felt its tusk and said the elephant is hard and smooth and like a spear.

I have thought about this fable a lot recently.  A while back, I was getting ready to play golf and was visiting with another golfer.  He was talking about all the anarchy in Portland, OR.  I asked if he had ever been to Portland.  He said no, though he had flown thru Seattle once.  I said wow, your pretty much an expert.  Sarcasm is never appreciated.

I then asked him if he knew anyone in Portland.  He said no, they are a bunch of *******.  I said ok, you have never been there, don't know anyone who lives there, I then asked where he got his information.  He said you know, cable TV political talk shows.  I thought to myself, anyone who thinks cable TV political talk shows are a source of information is only one brain wave away from flat-lining and it is a very short brain wave.

I have family and friends in Portland and in Minneapolis for that matter and have been to both cities several times this summer.  I have lived in both, at least for a short amount of time, which does not make me an expert, but infinitely more knowledgeable then my golf friend.

The reality is Portland and Minneapolis are many things including being wonderful cities.  Both have parks, museums, access to zoo's, professional sports, music, theater, and important to me, wonderful bicycling infrastructures.

Most importantly, each city has hundreds of thousands of wonderful residents who want to live there.  If you do not believe me, check housing prices.  Both cities have strong and stable real estate markets.

As aside, it is pretty obvious who makes the world a better place.  It is not a bunch of white guys driving around with guns to intimidate citizens.  It is faith leaders calling for justice, peace, and compassion for others.

With one major difference, my golf friend was like the blind men touching and describing an elephant.  The difference was they were blind, he was uninformed and too lazy to become informed.  We have complex problems in the US today and simple blind comments have no value.

The reality is the most significant event this year for Portland is the pandemic and Nationally elected leaders' inability to provide an informed, science-backed effective response.  The second most significant event this year for Portland are natural disasters, the effect on air quality, and again the inability of Nationally elected leaders to form any type of response. The racial injustice protests will continue until racial injustice ends.  It will take time, a change in National priorities, but I actually see dawn on the horizon for all three.