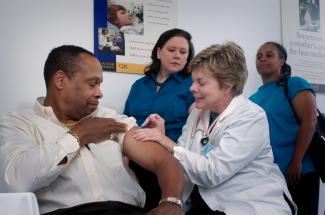 At first, I was afraid I was going to die.  Then I was afraid I was not going to die.  This was around 2000 and I had the really bad flu bug going around.  To make things worse, I had recently been diagnosed with a kidney problem of which one of the side effects was a weakened immune system.  I was miserable, but the very worst was, as laying in bed in the fetal position, Nurse Kratchett, otherwise known as my wife, would walk by and say, "You know, if you had got a flu shot as I said, you would not be having this problem".

After that, I always got a flu shot.  Partly because my Doctors recommended.  Party because I did not want to hear from Nurse Kratchett again.  A few years ago, even though I had the flu shot, I did get the flu again.  Though I was back in the fetal position, it helped to know Nurse Kratchett would not be making an appearance.

The flu is an annual health care problem for the US.  The CDC publishes a range of the impact of the flu and from that range lists an estimate.  For example, the estimates for the 2016-2017 flu season, was 29 million cases, 14 million medical visits, 500,000 hospitalizations, and 38,000 deaths.  Though the numbers of for 2017-2018 have not been finalized, they show a substantial increase in all areas ending with an estimated 61,000 deaths.

The coronavirus, which is different from the flu, has been around for a long time, however, currently the world and we as a country are dealing with a new coronavirus, COVID-19.  Though on the media back burner, the current flu virus is still going on and continues to be a health risk.

We are at the beginning of the time period for COVID-19 and it could and likely will get a lot worse.  This scary, however, the reality is everything can be scary.   Given this, it is important to maintain perspective and risk/reward balance.

There are lots of risks in the world.  The flu is scary.  Vehicle accidents are scary.  According to the CDC, annually about 3 million people are injured in car accidents and deaths are around 37,000.  Gun violence is scary.  Using CDC data, a Pew Research Study, stated almost 38,000 died of gun violence in 2017, about 60% self-inflicted, almost 40% murder.  The economic costs for all of the above are substantial.   But very few us get up in the morning worrying about a car accident or gun violence.

Personal health risks included being overweight, not exercising, smoking and too much consumption of alcohol.  All of these should be scary, but most do not think about it.

I am not in any part of the medical field, but I would expect the coronavirus to roll through the world including the US. One reason is coronaviruses are generally highly contagious and this is one is no different.  Another reason is actually good news in that research so far indicates most cases, about 80%, of coronavirus are relatively mild.   This could mean there are many more cases out there since it is possible, even likely, many who have the coronavirus have had mild symptoms.  This also means, if true, they are spreading the decease without even realizing they are sick.  Again if true, this continues to be good news, in that it means the actual percent of mild cases is higher than 80%.

Another reason I would not be surprised to see it spread is one main precaution is washing one's hands.  This does not seem to be a strength in the US.  A recent CDC study indicated only about 30% of men wash their hands after going to the bathroom. It is one of the reasons I believe shaking hands is way overweighted.  Women are better at an estimated 65%.  However, being somewhat better than men in this area is not very impressive because the bar is so low.  Frankly, if the fate of the free world is dependent on washing hands, we're probably in trouble.

The CDC along with every health care website I have visited has said wearing a mask is neither necessary or helpful for a healthy person.  However, unhealthy individuals should wear a mask to reduce the spreading of this decease or any decease for that matter due to coughing and sneezing.  So if you see someone wearing a mask, they are already sick and should either be home or on their way there.  Or they are suffering from another decease which is also contagious and dangerous, just in a different way.

Speaking of contagious and dangerous deceases, the scariest thing to me is the lack of knowledge, planning, and leadership in our Executive Branch and in Congress regarding public health.  The current Vice-President who was placed in charge of the response to the coronavirus has a very dismal track record on treating an outbreak of HIV when he was a governor.  This poor response indicates to me a lack of knowledge of both science and public health.

White House administrative staff have stated all coronavirus communications and statements must be first vetted by and coordinated through the Office of the Vice President, including those coming from the Health and Human Services Department and the Centers for Disease Control, senior level.  This, at best, is ignorant.  The CDC contains the brightest and most experienced health care minds in the country and adding a layer between them and the American people is both ignorant and dangerous as it increases the health risk to our country.

Li Wenliang, the Chinese doctor who contracted the virus while working at Wuhan Central Hospital and tried to issue the first warning about the deadly coronavirus outbreak died in early February.  All should recall that when he sent out a warning to other doctors on December 30th, 2019, Chinese police told him to stop "making false comments".

Let's be clear, there is no difference in my mind between the Chinese initial response telling the Li Wenliang to stop making false comments and the White House's response requiring the CDC to not speak directly to the public.  They are both the censorship of public health information.  We do not know, nor will ever know what would have happened if China had an initial different response and we do not know the long term effect of the White House's lack of leadership will play out, but I am scared it will not be good for myself and the American people.

Because of my kidney condition I have a weakened immune system.  Though I really hope it does not happen, I am not scared of getting the coronavirus nor am I scared of getting the flu a third time.  It may or may not happen and if it does, I will do my best to get through it.  I am very scared of an Executive Branch and Congress which does not understand public health and planning for long term health challenges.