The Cost of Natural Disasters 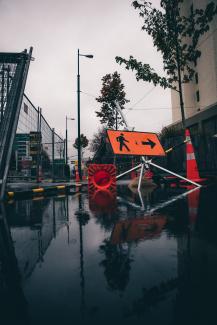 The Cost of Natural Disasters

Watching the tragic funding in Iowa, Nebraska and South Dakota this past week reminds me of the floods which took place in Fargo, ND in specific and all of Eastern ND and NW MN in 1997 and again in 2009.  I and my family were very fortunate during both of those floods.  In 1997, our house was on one of the oldest and highest streets in Fargo.  While sandbagging was taking place all over the city and many homes were lost, though we were only a few blocks from the Red River, we were not affected.  As many recall, this was the year downtown Grand Forks, ND first flooded and then burned.  In 2009, we lived in a Townhouse in a new development at the very south end of Fargo.  Though surrounded by dikes with the water within an inch of clearing one of the dikes, it did not. The development south of us was not so fortunate.

Many may think that natural disasters are part of global life, and that is true in one sense.  However, it is hard to argue against the evidence which supports an increase in the number and corresponding costs of natural disasters.

According to an article in the Economist, 8/29/2017, since 1970, the number of disasters worldwide has more than quadrupled to around 400 a year.   A Johns Hopkins Report stated in the United States in 2016 there were 43 natural catastrophes leading to huge property losses, almost double those of 2007.

2017 was the costliest year on record for natural disasters in the United States, with a price tag of at least $306 billion.  The National Oceanic and Atmospheric Administration, which tracks billion-dollar disasters, reported in January 2018 that the record total came from 16 separate events with damages exceeding $1 billion.  In 2018 the total costs are estimated to be about $91 Billion.

In a recently released report, the National Oceanic and Atmospheric Administration stated due to sea level rise, high-tide flooding is happening across the USA at twice the rate it was just 30 years ago.  Another source of information is the recently published book, October 2017, “The Water Will Come:  Rising Seas, Sinking Cities, and the Remaking of the Civilized World” by Jeff Goodell.

A US News & World Report dated August 1, 2018, stated the cost and damage from wildfires has been increasing.  A Department of Commerce analysis from November 2017 which took into consideration both direct losses of structures and rebuilding and the indirect costs such as the impact on the tax base, tourism, and deaths, stated the total annualized cost of wildfires can range anywhere from 71.1 billion to 347.8 billion.

The 2017 fire season included over 71,000 fires that burnt 10 million acres in the United States. The estimated cost to put them out was $2.9 billion.  This does not include loss of structures and rebuilding and again indirect costs.  As of November 2018, more than 52,000 wildfires burned 8.5 million acres.  The Camp Fire in Northern California which wiped out the town of Paradise, CA burned 153,336 acres and destroyed 18,733 buildings. It is considered to be the costliest natural disaster in the world causing $16.5 billion in damage.

It is clear the number of natural disasters has been increasing.  It is also clear the economic cost is increasing.  Every article I reviewed concluded this trend will continue.

It is easy, but not intelligent, to ignore both the immediate and long-term economic cost of natural disasters. Localized, communities have had to address natural disasters.  Though there is more to be done, both Fargo, ND, and Grand Forks, ND has aggressively implemented diking and other strategies to reduce the damage from spring flooding.  Miami, FL has also been addressing rising sea levels in a variety of ways.

For example, In 2017, the U.S. Forest Service spent over 50% of its budget fighting fires with the remaining balance used for forest management, capital improvements, and research.  This makes no sense.  National political leaders must fund agencies adequately so they can develop long term plans for dealing and hopefully reducing the economic impact of natural disasters.

If the National politicians and party you support either are not aware or do not address the potential immediate and long-term economic impact of natural disasters advocate they do so.  If the continued response is to ignore, I would then suggest you find new politicians and National party to support because I truly believe this issue will have a continuing and long-term economic impact.