Of Course There Is A Santa and Mrs. Claus 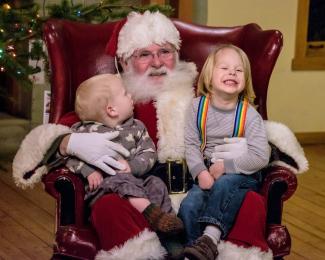 Of Course There Is A Santa and Mrs. Claus

Of course, there is a Santa and Mrs. Claus, but it is different today from the first Santa.

First of all, a little background.  The man behind Santa was a monk named St. Nicholas who is believed to born around 280 AD in what is now modern-day Turkey.  St. Nicholas was admired for his piety and kindness and it is said he traveled the countryside helping the poor and sick.  It is also said, at death, he left all of his wealth to the poor.  He became the patron saint of many causes including children and his death is celebrated on December 6th.

Before going any farther, it is important to recognize that in 280AD the Roman Empire was still in power and the world's population was just over 200 million.

Saint Nicholas's spirit lived on in the work of others but really did not take off until the very early 1800s in the newly formed United States when Santa Claus, who like many immigrants, had recently changed his name from Klaas to Claus.  What many do not realize is Santa had a life-changing event in the very late 1700s and also for the world around him.  He got married.

The woman he married, who now goes by Mrs. Claus, was a brilliantly talented woman who had obtained two Master's degrees and also a Doctorate in Education.  Sadly, insecure men of that time-restricted her and would not let her talents be used for the benefit of others, primarily children.  There were even some very insecure and jealous men who worked as town criers and would stand on street corners trying to make fun of her.  Fortunately, most who heard the criers, realized it was about their feelings of inadequacy, not her talent and Mrs. Claus had learned a long time ago small minds lead to small thoughts.

Thankfully for the rest of us, for Santa and now Mrs. Claus, it was love at first sight.  And Santa immediately recognized her immense talents and while he became the face of Christmas, she becomes the brains and year-round organizational director of the operation.  Not the first or last time that has happened.

Mrs. Clause figured out in the early 1800s what many men then and have continued to not understand today, the world is changing and fast.  In 1800, the world's population was approaching one billion people from the approximate 200 million of Saint Nicholas's time, but Mrs. Claus understood that in years to come, the world's population would increase into the billions with today's population approaching 8 billion people.  Mrs. Claus knew she needed to outsource so today you find Santa in many different ways.

So yes, there is a Santa Claus who with Mrs. Claus's executive leadership continues to feed the hungry and help the poor.  Oh, and for the record, after Mrs. Claus saw a nice looking man, told Santa to make some changes.  Though in public he still wears a white wig and beard, in private he goes with his natural bald head and has greatly trimmed his beard to a very stylish mustache and goatee.