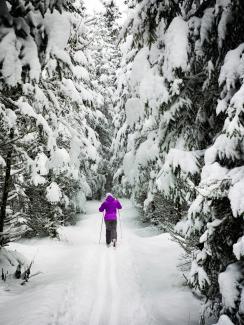 My wife asked me “Are you ok?”  I was lying flat on my back and did not say anything.  She asked again, “are you ok?”  I still did not answer since I had knocked the wind of out myself coming down a hill while cross country skiing at Rendezvous in West Yellowstone, MT.  She the same question a third time.  I opened my eyes and looked at her and said: “Would I be laying on [*naughty word*] back if I was [*same naughty word*] ok".  What the [*third time on naughty word*] do you think?”

She looked at our son who was skiing with us and said “he’s fine” and off they went.  She later said If I could talk like that, I was fine.

This was the second time I had cross country skied in the mountains.  The first had been two days early at Lone Mountain Ranch in Big Sky, MT.  Other than providing comic relief for anyone watching me, to say it did not go well would be an understatement.  After those experiences, I gave up cross-country skiing for years.

I originally started cross skiing years ago when my future wife and I were visiting her parents in the Twin Cities.  Her father, not being impressed with her choice, tried to steer me away from his daughter.  Wanting to be subtle, he took me cross-country skiing at local parks with groomed trails.  I quickly realized standing on cross country skies on level ground is difficult.  Going up and down hills were way beyond my beginning skill level.  There was a lot of falling on my part.  My crowning achievement that day was going down a hill and realizing I was in trouble, I decided to go into the brush to help break the imminent fall.  Turned out to not be a good life choice, but I survived.

Eventually, I got better, worse was not a possibility and became passionate about the sport.  Living in Fargo, ND, I skied in the local parks and in a state park about 20 miles east of the city.  When our children were young, we went to Giant's Ridge in North Central Minnesota which has outstanding groomed trails and at that time, we were told the US Biathlon Olympic Team trained there.

Cross country skiing in ND and MN, I was used to thoughtful, kind, forgiving hills.  Once I learned how to navigate them, I realized they went downhill and then evened out.  The first time I skied in the mountains at Lone Mountain Ranch in Big Sky, MT a number of years ago, I assumed it would be the same.  What I found out is many of downhills in the mountains are relatively steep with quick turns.  I, on the other hand, was used easy to moderate hills with either no or very gradual turns.  So when the trail turned, I continued to go straight.  This never ended well for me.  When I finally made it back to the Ranch headquarters, I was a broken and humbled man.

A friend said try Rendezvous in West Yellowstone, MT as he felt it was not as difficult.  Hence, two days later lying flat on my back with the wind knocked out of me.

A few years ago, I went back to Lone Mountain Ranch to try again and this time it went much better.  I took a lesson from a very knowledgeable staff member who taught me how to turn.  This turned out to be a life-saving skill.  Not great, but I can now do it.

There is a lesson there.  The first time I tried cross-country skiing in the mountains, my mind wrote a check my body could not cash.  In many areas of life, "you don't know what you don't know" and working with a knowledgeable professional can be a very good thing.  However, the problem is finding one who is truly knowledgeable and professional versus someone who simply says they are.  Fortunately, in this situation I did.

My passion for cross-country skiing has returned.  Be it at a state park in Minnesota years ago or now the mountains of Montana, I often find the beauty to be breathtaking.  Equally if not more important, when cross-country skiing by myself, I find the internal peace and spiritual tranquility which for me is similar to being thirsty and having an empty glass of water being refilled.

I like being myself at times for self-reflection and simply being.  I find cross-country skiing or riding my bike, or hiking or simply taking a walk are the best ways for me to do so doing.  I would suggest this important for all of us in some form or another.  I would also suggest to be meaningful, this is not a time to rail or be angry at others or entities, but true self-reflection and simply enjoy the beauty of life.

Finally, I like being by myself at times, though, in full disclosure, I have noticed that people like me better when I am by myself.