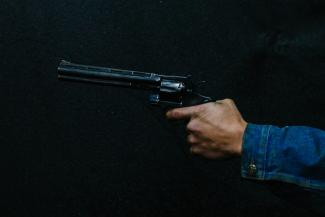 In our 24-hour news cycle, death threats and death for that matter, are common.  Members of Congress are often recipients,  The U.S. Capitol Police investigated 4,894 threats last year and the 2,502 so far this year is on pace to surpass last year.  One recent death threat has stuck with me and I think about every day.  It was a death threat made by a now-fired Louisianna policy officer against Alexandria Ocasio-Cortez.

Threatening anyone with death because you do not agree with them is evil.  Threatening a woman is especially evil. Without a doubt, one reason this bothers me so much is my daughter and daughter-in-law are bright, thoughtful, educated women.  Would some white man want to cause harm to either of them or any of the other bright talented women I know because he did not agree with them?

Though I do not know this person, I would suggest the following are his traits and others like him.

Death threats against politicians from white men are not new.  A data analysis commissioned by Quartz found that going back to 1970, about 75% of those charged for making threats against US politicians come from the ideological right. They are almost entirely US citizens, male, and roughly 85% white. About half of the defendants were under 30. The intended targets were primarily Democrats.

However, it seems to be growing.  At a recent hearing, acting DHS Secretary Kevin McAleenan called "white supremacist extremist violence" a "huge issue".  The Anti-Defamation League’s Center on Extremism found that domestic extremists killed an estimated 50 people in 2018.  The report also found “every single extremist killing” in 2018 “had a link to right-wing extremism,”

The husbands of my daughter and daughter-in-law would agree, very few men could hold their own in an open debate or discussion with either.  Both have post-graduate degrees, are well-read and successful professionally.  I have no idea if either would be interested, but both would be outstanding members of Congress.  If either were ever to run and win, does this mean an ignorant white man who disagrees with a position, will threaten death?

And this is the real issue here.  Regardless if you agree or disagree with her politically, when a man threatens Alexandria Ocasio-Cortez and others agree even if implicitly by not denouncing, he threatens every woman like her regardless of specific policy positions.  If we as a society, tolerate when white men degrade and threaten women, we as a society degrade ourselves and the greatness of our country.  By looking the other way, we are also complicit in accepting a threat to both democracy and capitalism.