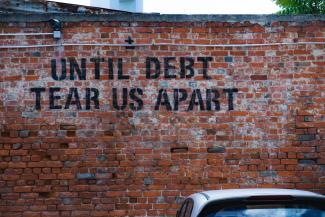 Finally, though they have bicycles, they decide they want new ones, again charging them to their credit cards.  Of course, it is not possible to have too many bicycles and this is an excellent purchase on their part.

A bit later, now with children, they look at all their debt and decide to not pay it.  If you understand this, you understand the Federal debt ceiling.  The debt ceiling is not about future spending, it is simply about paying current debts.  If the couple does not pay their debt, there are consequences.  They may go bankrupt, could lose everything and since their cars could be taken, may end up living in a tent, with their children.  If the Federal Government does not raise its debt ceiling to pay current liabilities, millions could be affected financially and some could lose everything with the possibility of eventually living in tents.

The debt ceiling is a result of a bill enacted by Congress in 1917 which means Congress has to vote to increase the debt ceiling to pay current obligations, not future ones, current ones.  For years it was automatic but a number of years ago it became a political issue that one party could use to make the other party's life miserable.

And for the record, and I have said it before, and I understand this perspective makes some unhappy, but in my estimation, we have two political parties, tax and spend and borrow and spend.  If you do not agree, please note the following.

I am sure members of one party will look at this and blame the other party and make excuses for their own.  This is part of the problem.  Just like our couple at the beginning are dysfunctional, so are our political parties.

For me, as a moderate independent, one of the most frustrating aspects is after increasing the Federal Deficit by $22 Trillion over 20 years, what do we have to show for it?

Another frustration for me, is there are politicians and their supporters who seem to actually believe that not raising the best ceiling is being financially prudent.  So let's discuss this. According to a report dated 9/21/2021 prepared by Moody's Analytics:

Other consequences include social security benefit payments could stop, pay to military members, as well as other federal employees could also stop.  Many federal programs could stop.  The US's credit rating could be downgraded.

In the meantime, it would seem to me if the US should go bankrupt, all seats of Congress, House and Senate, should be up at the next election with the caveat none of the current members would be allowed to run.  If a specific Congress causes the country to go bankrupt or even get too close to it, they are not competent to serve in Congress.  None of them.