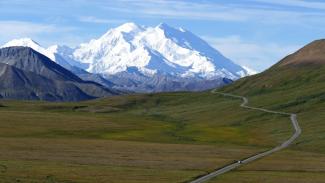 About 10% of the people who visit Denali see the mountain on a clear day and we did.  Juneau is a wonderful city.  And I was so impressed with our various tour guides.

Denali
We left the cruise at Whittier and took a train to Denali National Park.  The next day we went on a "Wilderness Tour" which should never be confused with a real wilderness tour.  Sitting on a bus for eight hours is a great way to see the Park and some Caribou and Moose, but I suspect a real wilderness tour would include serious hiking in the Park. At the same time, it helped me visualize the Park and have a better perspective on high tundra.  When we did walk, it was liking walking on a cushion.

We then went to Denali State Park which is about 30 miles from the mountain.  We woke up to clear skies and a beautiful view of not just Denali, but also surrounding mountains.  We did about an 8-mile hike to a ridge which had an impressive view.

Denali is beautiful and I would like to back and spend some serious time.  It is also being affected by climate change.  If you do not believe me, spend some time on the following section of the NPS website.

Juneau
Our daughter-in-law is from Juneau, born and raised.  She and our son along with her mother have all talked about Juneau and what a great city it is.  I do not visualize well, so for me, getting there was a big part of our trip.  And the city along with the surrounding area was even better than described or anticipated.  It is beautiful and an outdoor playground, summer, and winter.  Juneau has ocean bays, mountains, rain forests, glaciers. In the summer, one can hike, bike, sail, fish, all on the same day.  In the winter, both downhill and cross country skiing along with snowshoeing. There is an abundance of wildlife.  Though we saw a variety of wildlife, the highpoint was seeing my first porcupine in the wild.  The porcupine was less impressed. I would love to go back to Juneau and spend a significant amount of time.

By the way, though I tried from a variety of different vantage points, port, lookout points while hiking, on the boat when whale watching, I can assure you, it is not possible to see Russia from Juneau.

Tour Guides
We had a number of tour guides on our trip, some as an individual guide and some times two or more. All were very knowledgeable and passionate about Alaska.  They made our tours both enjoyable and more important, informative. Some were in Alaska for their first summer, and others had lived there for years. Whenever I got a chance, I asked them about themselves and how they got to Alaska.   One, who was a guide on the whaling boat and followed the whales from Hawaii to Juneau.  Another left her job as a chef in Colorado and was leading bike tours in Skagway.  Our Wilderness Tour guide had moved to Alaska in the mid-1990s from Baltimore and for the eight hours on the bus, he was a fountain of information ranging from wildlife, bird migration, plants, to climate change and he was very funny.  My favorite was a young lady who had a degree in Environmental Science from the U of Minnesota and moved to Alaska to give hiking and nature tours.  Her real passion was solo backpacking and mountain biking.

What I admired most about them, was their willingness to take risks, seek new challenges, live life on their terms, and perhaps most important, fulfill their passion for the outdoors and nature.

Among the interesting things I learned, were:

Alaska
We got a sliver of Alaska and I want to go back and spend more time.  It is beautiful, rugged, historic, and still wild.