Diversity and Your Financial Future 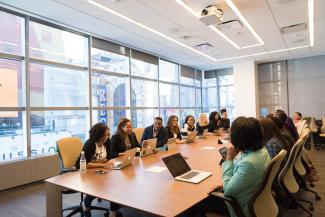 Diversity and Your Financial Future

It was the mid-1970s and I was in Mexico for the first time as my older brother had recently taken a job as an engineer in Mexico City.  We are at one of the larger markets and I was behind an older women who was negotiating a price on an item.  She turned to me and said in frustration, "he does not speak English".  I said, ma'am, your in Mexico.  "I know she said, but he should still speak English".  And there you go.

For the record, my high school Spanish was still pretty good and I did ok talking to the locals.  One day, I saw a very attractive young lady sitting by herself and after spending at least an hour hour working out the syntax and proper prepositions, I asked her to have coffee with me in perfect Spanish.  She said "no" which is pretty much a universal word.  Turns out I was not an attractive young man.

This was my first real experience with diversity.  I did some have a number of friends at college who were Norwegian.  Most spoke English, some could even make full sentences.

Today, our country is struggling with diversity.  The fact of the matter is we have always been a diverse country.  When the early immigrants form Europe came to the what was then the New World, the inhabitants were all Native American.  Of course they did not know they were Native Americans, they did not find that out until hundreds of years later.

In 1565 a Spanish soldier founded what is now St. Augustine, Florida which is considered to be the oldest permanent settlement in the US.  1619 was when the first now Black Americans were brought the the US as slaves.  The Hispanic actress Eva Longoria often talks about her family coming to what is now Texas in the mid-1700s when it was New Spain or Mexico.  Since then, her family has never moved, but were at different times, citizens of Mexico, Texas and now the US.

The Irish begin coming to the US in numbers in the early 1800s, the Italians in the late 1800s.  Chinese begin migrating to the US in the 1850s, first to work in the gold fields, but eventually as cheep labor in many industries.  The one thing they all had in common  along with my ancestors who likely came starting in the 1600s and ending in the 1800s, they all had to work very hard.  Obviously many as slaves, but the rest for very low wages.

There is something of which people who look me should be afraid.  Let me give you some more projections.

Now some last statistics.  Unless Congress passes new legislation, the Social Security Trust will be depleted by 2034 and benefits will be based on just working people paying payroll taxes which means a reduction of about 25% the current benefit.  In other words, unless changes are made, a monthly social security benefit of $2,000 will reduce to $1,500.  Or, right now about 15% of Medicare costs are paid by paid by people on Medicare.  The rest is paid by workers and the general fund.

One final thought.  If there is 55 year old non-hispanic white person who is promoting a white nationalistic agenda and a 25 member of any number of diverse groups, who going to make your retirement more secure?  Take your time, its not a trick question.  The white person who has a few more working years and then will be a drain on the system or 25-year old who will be working and paying into the system for the next 40 years?

If you have missed the point of this commentary.  White nationalism is not only ethically immoral, against the foundation of our country, but also makes no financial sense.