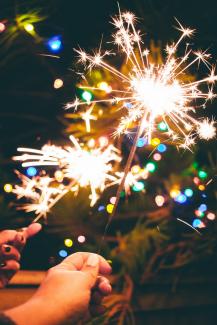 I will celebrate New Year's Eve well past Midnight into the wee hours of the New Year.  Of course, I will be celebrating the New Year on Paris, France time which gives me a lot of flexibility in deciding when to stop the party.  It has been a long time since been awake for the New Year in the time zone in which I am residing.  That is not because I am getting older, though one could make the case I am less young.

I have never been a big New Year's person.  But I do understand that the calendar year is one of the ways we track time and events.  As a country, 2020 was a very difficult year.  The pandemic has led to the loss of over 300,000 American lives along with devastating economic loss for millions of households.   We as a country pushed our health care system to the brink and beyond.  We were confronted by racial inequality and injustice. Finally, we had a contentious National Election where truth was often as rare as mosquitos in the desert.

We have a lot of intelligent thoughtful educated experienced people in this country with expertise in a wide variety of areas.  They are a tremendous US asset and listening to them, learning from them, makes a difference.  To become informed and ultimately solve complex problems, most of us have learned any time there is a choice between listening to respected independent scientists representing the consensus of scientific opinion on a subject or a cookoo bird, always better to go with the scientists.

We are a Nation full of hard workers.  My entire life I have watched people doing all types of work taking pride in their work and striving to do their best.  During the pandemic, easy examples include health care workers, the staff at grocery stores along with transportation workers to name a few.  My only work concern is members of Congress.  I often wonder if between vacation time and begging for money from PACs and SuperPACs Congressmen how much time they actually spend working on behalf of the people they are supposed to represent.

We have empathy for others.  Maybe not all of us, but I believe the majority of us do.  The racial injustice protests of this summer emphasize that if we are all not equal, then none of us are equal.  The movement for equality starts with empathy.  I would suggest more people than ever are viewing racial injustice, not from their perspective as a non-Hispanic white person, but from the perspective of some who has not.  That's a good thing.

We believe in democracy.  We had record numbers of voters for the Presidential election and that is a good thing. The more people who vote, the better our country will be.  Even though the results of the election have been verified by officials from both political parties along with both state and federal judiciaries, there are some that saw there was voter fraud.  Of course, there are also some who believe the world is flat, the moon is made from cheese and Attila the Hun was a pacifist.

We have had a very difficult year, but there are many reasons to be optimistic.  But it is up to each of us to work towards a Happy New Year.  In other words, don't just wish for a Happy New Year, make it one.  Listen and learn from independent educated sources of information.  Be empathetic in all areas, especially health care and racial injustice.  Be thankful for democracy and oppose all attempts to subvert it.  The US always has been a great country and continues to be so, but it is up to each of us to make it so.  Happy New Year and let's make it happen together.