Family biking and the little voice. 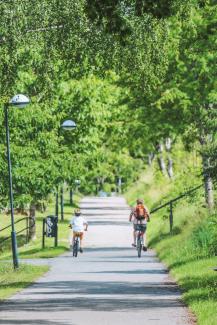 Family biking and the little voice.

Years ago, my young son and I had just pulled into a rest stop.  My wife and our daughter were just behind us. We were bicycling on one of the original Rails to Trails bikeways in North Central Minnesota.  My wife, knowing I had some garbage in my pocket and also realized I was incapable of seeing a garage can that was literally less than five feet away, rode up to point out the garbage can to me. Unfortunately, she forgot to clip out bike pedals and tipped over right in front of our son.  That was the first time he had heard her use very naughty words.  She was not injured and of course, I did show the appropriate amount of concern.  I would have got to her sooner, but I tripped over the garbage can.

That was one of the many family adventures we had on our bicycles.  The best investment we ever made was when we bought bikes for all of us and started doing day bike trips. The kids were 3 and 7 when we started and by the time the youngest was five, he was riding his own bike.  Biking made for great family and bonding time.

We road on bikeways all over Minnesota.  When the kids were 7 and 11, we biked in both the North and South parts of the Teddy Roosevelt National Park in Western ND.

Though there is a long way to go, the bicycling infrastructure has improved significantly compared to when we first started biking as a family.  The thoughtful intelligent leaders of many states and communities have figured out that if people come to bike, they spend money which is good for the local economy.  Our kids now have kids and everyone still bikes and has contributed to local bike economies.

I have been fortunate enough to do a week or longer bike trips with both of our kids and if you have an opportunity to do so, at any age, make it happen.  There are bike tours designed especially for families. For example, Adventure Cycling, the premier nonprofit cycling resource in the US and is headquartered in Missoula, MT, offers multiple bike tours.  As part of their tours, they offer Family Bike Tours.

The first time my son came with me on a week tour, it was the summer before his junior year in high school.  It was the CANDISC which was my home state tour in ND and I had done it several years in a row making some wonderful friends.  Anyway, returning home after a week of biking, my son walked into the house and said to his mother, "people like dad and dad likes people, who knew".  Like I said, a bonding experience.

There are other benefits.  When the kids were 6 and 10, we drove to Itaska State Park in North Central MN which is the headwaters of the Mississippi. At that time there were five miles of paved bikeway from the entrance to the headwaters and then a 15-mile paved bike friendly one way around the Park.  We had just got on the one-way which was very hilly when our son had to get off his bike to walk the rest way to the top of the first hill.  By this time, our daughter and my wife were well ahead of us.  He then said he was sure his sister, who was four years older and in a professional dance company, must have had to walk up the hill also.  I told him it does not matter, what matters is he tries his best.  I then said,

He got on his bike and rode all the rest of the almost 15 remaining miles passing adults who were walking their bikes up a steep hill.  By the way, it may be depressing to have a six-year-old on a one-speed pass you a bicycle. Anyway, when we got done, he looked at me and said, "my little voice told me I could do it".

This was never brought up again, until years later when he had just finished working a summer construction job after his freshmen year in college and we were again on the CANDISC in Western ND.  It was a day of rolling hills and we were climbing a particularly long hill when he caught up to me and said, "dad you remember the story you told me about the little voice".  Feeling pleased I said yes. He then said, "that was a bunch of crap you told a little kid to make him do something. You should be ashamed of yourself".  As I said, biking breeds family bonding.