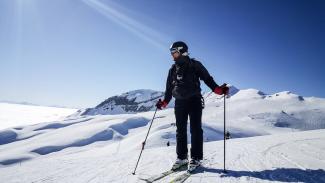 This December is the 15-year anniversary of the very first time I went downhill skiing in Big Sky, MT or anywhere for that matter.  Since I have been on Medicare for a few years, it does not take a math major to realize I was very late to the sport of downhill skiing.

My wife and I had just closed on our condo in Big Sky in December 2004 and decided to go skiing. Kim had grown up skiing in Minnesota but never in the mountains.  I had been cross-country skiing for years, but it turns out going down a hill on cross country skies is a lot different than down a mountain on an entirely different type of skies.

Though I had been at the ski resort before as a tourist, driving into the parking lot and looking at the mountain, gave me second, third and fourth thoughts as to why this was a good idea.  Fortunately, Kim was driving and kept the keys to the car.

Initially, I was going to just go up and down, but fortunately, I realized a lesson would be an excellent life choice.

I was put in a beginner class with three other adults.  However, since it was early December and not a busy day for ski school, I was considered to be the most advanced of the four of us and given a private lesson.  The reason was not my superior athletic skills, but I had my rented ski boots on when we met and the other three were waiting for professional help in this endeavor.

My ski instructor's nickname was Pablo and he was excellent.  We spent the next hour going up and down the magic carpet learning the basics. The very very basics.  Me and a herd of 3-5-year-old kids, all better than me.

Finally, as our lesson was coming to the end, Pablo decided I was ready for my first run.  We went up the Explorer lift, which was one of the oldest and slowest lifts on the mountain and then down the Lone Wolf run which is arguably, the easiest run on the mountain.  Eventually, after skiing for a while, Lone Wolf would look like a flat table to me, but the first time, it looked like dropping off a cliff.  I was able to slowly work my way down, falling only once.  Our lesson over, Pablo gave me a hug, said I would get better.  He did not mention it would have been impossible to get worse.

Just as Pablo was about to leave, Kim showed up with a huge smile on her face.  Keep in mind, exactly two years earlier, she was about to start her journey through breast cancer, beginning with surgery, then chemo and finally radiation.  Now she was skiing in the mountains.

We decided to do a run together.  Now that she was an experienced mountain skier, the Explorer lift and Lone Wolf run were a step back, but she graciously agreed.  Unfortunately, she did not coach me on getting off the lift as Pablo had, so I wiped out and they had to stop the lift.  Very embarrassing, especially with all my 3-5-year-old classmates giggling.

With Kim patiently waiting at my every turn and an occasional unplanned pirouette, I made it down the slope a second time.  By the way, a pirouette is easy on the dance floor, but very difficult to execute on a ski slope and requires great athletic skill.  It does not get the amount of respect from other less talented skiers as it should.

I looked at her and said "how [naughty word] long do you think it will take me to get down?  Even if I fall and roll the rest of the way, I don't think you will have time to drive to Bozeman and pick up a few things at Target before I show up." What was funny was she was entirely serious.  She was thinking of all the things she could do before I made it to the bottom.  For the record, she was still in the bathroom when I got there.

As I think back to that first-time skiing, though a few people made fun of me as a beginner, most were supportive.  I got better and learned to enjoy this beautiful sport. I would also pass on a few comments.