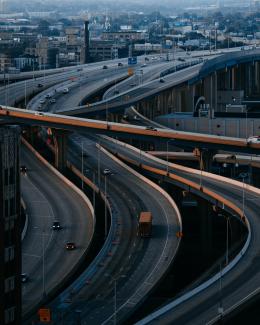 I was coming down Cottonwood Pass in Colorado on Ride the Rockies when I reached my maximum speed ever on my road bike, 48.5 mph.  I had been in the low to mid-forties many times, but this was my max.  I know for speed junkies this was pretty pedestrian, but for me, I was moving.  I do remember thinking this would be a bad time to hit a pothole.  A pothole at  5 mph can lead to a lot of road rash on a bike, at that speed, the only thing left would have been road rash.  Later a friend told me I would probably look better as road rash.  Yes, I know, I need better friends.

The reality, bike or car, it is never a good time to hit a pothole.  Or have bridge collapse well driving on it.  You do not think that can happen?  Think again.  Remember in August of 2007 the I-35 bridge collapsed between Minneapolis and St. Paul. According to the American Society for Civil Engineers [ASCE], of the 617,000 bridges across the United States, about 7.5% or over 46,000 are considered to be structurally deficient.  Try not to think about that the next time you drive over a bridge.  To quote a famous movie line, "do you feel lucky today".

The ASCE assigns Bridges a grade of C.  Seems pretty average until you see the Roads grade which is D.  To cite a few others, Aviation is C-, Dams D, Drinking Water C-, Energy C-, Hazardous Waste D+, Schools D+, Waster Water D+.  [For the full report, go to https://infrastructurereportcard.org/]

But Congress has a chance to get it right.  The proposed American Jobs Plan which is really a plan to upgrade our infrastructure is an absolute necessity.  For sure it is an economic and infrastructure plan, but it is also a quality of life and safety plan.  If you support a member of Congress who does not support this Plan, please find a new member to support.

If a member of Congress says it too expensive.  Compared to what?  From the time period beginning in 2001 and fiscal year ending in 2019, the federal deficit increased from $5.7 Trillion to $18.7 Trillion.  Add an estimated $3+ Trillion for 2020 we are pushing $22 Trillion of total National Debt or an increase of about $16.3 Trillion in 20 years.  And what do we have to show for this as a country?

For those that think it is a political party thing, I would agree.  As an independent, I have thought for some time we have two political parties in the US, tax and spend or borrow and spend.  Over the last 20 years ending with the last election the spend and borrow party has controlled the presidency 12 of 20 years, the House for 14 of 20 years, and the Senate has been split equally between the two parties, 10 years for each.

So if any Nationally elected politician says he or she is worried about the National debt and the person was not just elected, watch out for two things.

For those concerned about taxes on the very wealthy, do not worry, they will be fine. According to a Federal Reserve Bank, the top 1% in the US has gradually increased its share of the total wealth in America to $35.5 Trillion at the end of 2019.  The next 9% has a total wealth of about $40.1 Trillion.  The two control about 70% of the total US wealth.   By comparison, the bottom 50-90th percental owns $30.9 trillion, and the bottom 50% own $1.7 trillion of the total wealth or less than 2%.  If this bill passes with corresponding increases in taxes, the smart money will make more money and for those that do not, that's on them.  More importantly, if the legislation actually helps the bottom half of households become more financially independent, that is absolutely a good thing.

Our country is in dire need of upgrading our infrastructure.  It will create jobs.  More important, it will improve the quality of life and often simply save lives.  So, I would suggest or beg, that you instruct your members of Congress to back this bill.  Tell them it's time to go big or go home.  If they cannot go big, go home.  Please!!!

PS. If you agree with this blog, please pass it on.  It's important.  If you disagree, please ask yourself why.