Good and not so good financial advice. 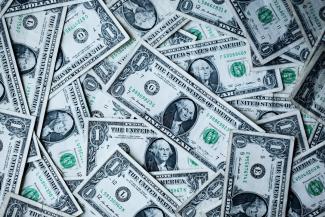 Good and not so good financial advice.

I had just got off the golf course and was visiting with the young gentleman in charge of returning golf carts.  I asked him if was a student.  He said, yes, studying finance.  I told him my background, Certified Financial Planner® with a Master's in Financial Planning and had owned a wealth management firm for years.

I then asked him if he wanted my best financial advice?  Of course, he said yes. I then said if he needed a pen to write it down.  He assured me he could remember it.

I then said, "Marry money!".  His partner working with him started laughing so hard he had to sit down.  I continued, this is not easy to do.  Before the pandemic at the end of 2019, according to a Federal Reserve Study, the total wealth of the US was about $107 Trillion.  Of that, almost one-third. $30.4 Trillion is owned by the top 1% of households and the next 9% own about $40.1 Trillion for a combined 70% of total US wealth.  So you are down to down to 10% of the households in the US.

We then discussed other limiting factors. The vast majority of individuals in those households are either already in a committed relationship or for one reason or another are not looking to get married.  Also, there can be a lot of inter-marrying in this group so that reduces your chances even more.  Finally, he wanted to stay within his age group which really limits the pool even more.

I then said, "dude, this is good advice, but is likely not to work for you, so do you want my other financial advice".  With a little hesitation, he said yes.  I said, "first of all, you are doing everything right in getting a degree.  The future will belong to the thoughtful and educated".

I said government maybe your friend, but political parties right now are not. We were in AZ so I mentioned the party losing the National election was implementing a recount in one AZ county at taxpayer cost even though it will have no impact on the election results.  One of the items they are looking for on ballots is bamboo fiber because they believe ballots were shipped in from Asia and the bamboo fiber will show up under a scanner.  Yeah, I know, I cannot believe it either.

Or National leader for the same party was just demoted for saying the truth.  When a political party spends taxpayer money looking for bamboo on ballots and censures a leader for stating the truth, they have no ability to help you.

But even with that, this is still a land of opportunity and you can create your own destiny.  Because of the foibles and mismanagement by generation, baby boomers, it harder than in the past for you and your generation, with less margin for error, but it can be done.

Every generation faces challenges, but yours may seem impossible.  The costs of health care for my generation. The consequences of climate change including increasing costs of natural disasters, water challenges, coastal flooding, to name a few.  Also, the challenge establishing sources of energy that are both efficient and sustainable.  But challenges lead to solutions. Being part of the solution in addition to addressing a problem and making the world a better place, has the potential for building wealth.

And you have skills.

If you are neither born into wealth or marry it, building wealth comes down to saving and investing and/or building equity as a business owner and/or part owner.  The vast majority of people I worked with over the years started will little or nothing, but built wealth over a long period of time one year at a time.

Finally, if you do decide to get married, money is the absolute worst reason for making that decision.  I was kidding when I said that.  If you are lucky enough to find a partner to face the challenges of the future with whom you share each other's dreams, goals, and passions that is worth much more than money.  A team of one is fine, a team of two is much better.

One last thought.  In some respects, we are entering the most exciting time period in US history.  Have fun because one of the best parts of life is having challenges and meeting them.