Gun Violence: Mental Illness or Money or Both 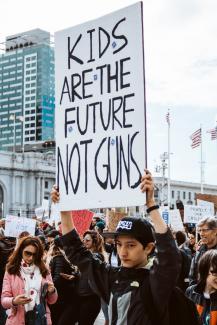 Gun Violence: Mental Illness or Money or Both

After the tragic shooting in Uvalde, Texas, the Governor of Texas called the shooter mentally ill.  Well, I suspect anyone who shoots a group of unarmed people to make a political point is mentally ill, be in Uvalde, Buffalo, Las Vegas or any of the mass shootings over the years.

But it is important to point out, so is the Governor of Texas along with the Senator for Texas, cable and radio talk show hosts and all their followers who blame the shooting on mental illness.  They all have a form of mental illness, mental deficiency or both.  It is possible to have both.

Mental illness can be defined as significant changes in thinking, emotion and/or behavior. Distress and/or problems functioning in social, work or family activities.  Mental deficiency is when your personal intelligence elevator does not have enough juice to get out of the basement.

Though I majored in psychology in college, I passed on grad school went directly into the work world.  A major does make me an expert on anything, but I did pick up a few things.

For example, the above mentioned people or groups may have schizophrenia in which people interpret reality abnormally. Schizophrenia may result in some combination of hallucinations, delusions, and extremely disordered thinking and behavior that impairs daily functioning, and can be disabling. People with schizophrenia require lifelong treatment.  They should not be governors or elected to state or federal legislators.  Nor should any one take political opinions from them.

It seems to me individuals or groups who believe the answer to ongoing gun violence in the US is more guns are delusional and/or have disordered thinking.  For this reason, there is no point discussing with them, because while you are living in the world where a clear sky is blue, they are living in some alternative reality of their own imagination where on a clear day the sky is a variety of different colors.

They may point to the 2nd Amendment, but they will not mention the part in the 2nd Amendment which says a "well regulated militia".  The debate on the meaning of the 2nd Amendment has been going on almost since the beginning of our country.  The Supreme Court has looked at the 2nd Amendment differently over they years.   In the 1886 case of Presser v. Illinois, the Court held that the Second Amendment applied only to the federal government, and did not prohibit state governments from regulating an individual’s ownership or use of guns.  The Court changed directions with two recent cases, District of Columbia v. Heller (2008) and McDonald v. Chicago (2010).

It's interesting and sad, the Supreme Court believes it is acceptable for states to regulate women's bodies but not control guns.  If one takes this line of reasoning to its extreme, the states can take away a woman's right to choose, but if she and other moms and dads want to protect their children by regulating firearms in their state, they cannot choose to do so.  This is clearly a risk issue for parents as the CDC just released a report stating that firearms are the leading cause of death of children's ages 1-19.  So clearly protecting children is not the objective of gun rights supporters.

But the reality is this is not about mental illness or the 2nd Amendments, it's about money.  According to one report, the above Texas Senator has received over $300,000 from gun rights groups in the 2018 election cycle.  A different report found that the NRA spent over $2 Million lobbying the Texas Legislator, more than in any other state.  The NRA and other gun lobbies spend tens of millions each election cycle on politicians that support their agenda.  Though called political contributions, they are really simply bribes.  And a bunch of children in Texas are the latest group to pay the price for these bribes.

If you have not done so, you should check out Ryan's Busse's book "Gunfight - My Battle Against the Industry that Radicalized America".  In part, it is about the excessive profits from automatic firearm sales have driven gun lobbies.  Busse should know, he was an executive in the gun industry for 30 years.  The Montana resident is also a generational gun owner and outdoorsman.

According to research from the independent nonpartisan organization Everytown, the total cost of gun violence in the US is about $280 Billion Annually.  According to their report, "This $280 billion problem represents the lifetime costs associated with gun violence, including three types of costs: immediate costs starting at the time of an incident; subsequent costs such as treatment, long-term physical and mental health care, forgone earnings, criminal justice costs; and cost estimates of quality-of-life lost over a victim’s lifespan."

We as a country need to do two things.  In addition to reasonable gun control, we also need to make the gun industry financially responsible for all gun violence in the US.  This would include state and federal sales taxes along with initial and annual registration fees.    Annual fees would be collected on a pro-rata basis.  A single shot hunting rifle would be pay a very minimal annual fee while an automatic firearm or handgun would pay a larger fee.

According to 2021 Pew Research report, only about 40% of households have at least one gun. All of us are currently paying gun costs so we are subsidizing gun owners.  We as a country can no longer afford this subsidy.

Going forward, I would hope independent voters like myself do two things: