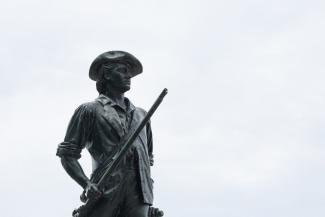 I am not a fireworks person.  If I happen to be outside at night and there are fireworks, I may watch and say to myself, "that's really cool", but this the extent of my interest.  Fireworks have never made sense to me as a celebration of the 4th of July.

If one really wants to celebrate the 4th, it seems to me, the following are some of the best ways.

Hike
Take a long walk or hike.  Unless on water, the forms of transportation in 1776 were walking, riding a horse, or being in a horse-drawn carriage or cart.  For most, it was walking.  There are many examples of Revolutionary War soldiers marching great distances, over hundreds of miles, to engage with the British Troops and their allies.  In the book, "1776" [see below], on the march from Boston to New York, a member of the army recalled later they normally did 5-6 miles before breakfast and 15-20 miles was the average.

If you really want to be authentic, wear buckskin, no mosquito or bug repellent, and eat hardtack.

Educate, Read and Learn
Education was very important to our Founding Fathers.  Some like John Adams and Thomas Jefferson had significant formal education while others like George Washington and Benjamin Franklin had minimal formal school, the equivalent of a few years in elementary school, but were voracious readers and self-educators.

All were life-time learns as were many other Founding Fathers.  We all should do the same, year-round.

I read both historical non-fiction and historical fiction books for various time periods.  Related to the Revolutionary War, there are many from which to choose.  To celebrate Independence Day, spend at least part of the day and days leading up to it along with afterward reading about the beginning of our country. Two of my favorite are:

Note:  Before reading any non-fiction or historical fiction book, verify the author's education, background, experience, and ability to provide an educated non-biased picture of the time period.

Think
Think about the time period.  Much if not almost all of our daily life did not exist in 1776.  Reading historically accurate books helps us imagine life at that time.

I would humbly, but strongly suggest that the Declaration of Independence, Constitution, and Bill of Rights cannot be accurately understood unless one has a picture of the time period leading up 1776 going back to the signing of the Magna Carta in 1215 in England.   Our democracy and constitution are built from a variety of sources including England at the time and for years before, Greek Democracies, and the Iroquois League of Nations.  Our rights today come from our Founding Father's historical knowledge and perspective of freedom of speech, freedom of the press, freedom of religion to name a few and are guarantees of some of the most important freedoms we enjoy.

Enjoy our country's birthday.  We are a great country, always have been, and if we stay thoughtful, informed, and educated, we always will be.  And as part of your celebration take a hike or at least a long walk, read historical books from credible authors, learn and think about our beginning.  It is an amazing story.

One last thought.  Our Founding Fathers did what they did to improve their lives and the lives of others living in the Colonies.  This was done at great risk to themselves, both their personal wealth along with their life.  The world was changing in the 1700s as it today.  There some similarities, but many many more differences.  As we celebrate our history, one of the best ways to honor our Founding Fathers is to think about how we can make our country better for all of our citizens going forward.  They would expect us to do so.