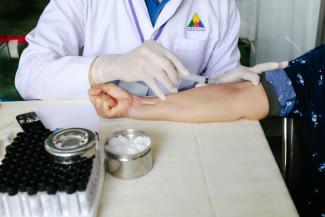 I turned to the Doctor and asked, "how long do you want me to keep going".  He looked at me and said, "why have you not passed out already”?  Then he said, “you should be on the floor”.

I was doing a stress test and my heart was beating over 200 beats a minute.  Turns out that is high.  A weekly earlier, during a physical, as I preparing to bicycle across the US, I had mentioned to my GP sometimes when I worked out my heart would race. He then said, "why have you never brought this up before"? I said I did not think it was that big of a deal.  He gave me the "how dumb are you look".  I gave him the look that said "to answer this, we would have to rank all your patients according to dumbness and see where I end up".

Actually, I do not believe I am stupid when it comes to health care.  Though I have certainly met many individuals who are more informed than I in any one phase of health care, I have met very few who I thought knew more than me about health care overall.

In fact, health care expenses are a leading cause of bankruptcy in the US.  In February 2019, A CBS study found about 67% of those filing for bankruptcy site medical issues as a key contributor to their financial downfall.  A substantial of those applying for bankruptcy had some form of health insurance, but due to deductibles, co-insurance, and uncovered expenses, they still needed to apply for bankruptcy.

I have a long-term client who is excited to be eligible for Medicare.  The reason is the last few years, the individual has been paying for an individual health insurance plan with a $3,000 deductible and an annual premium of about $12,000. Becoming eligible for Medicare will reduce the total cost of the individual's health insurance.  The new total annual premium for the individual's Medicare, Medicare Supplement, and prescription coverage plan will be about $4,000 or a reduction in premiums of about $8,000 annually.

Why is this?  The reason is Medicare is subsidized by Federal Revenues.   According to a 2018 study by Kaiser Family Foundation [KFF], 43% of Medicare Revenues come from the General Fund.  By comparison, payroll taxes and Medicare premiums are about 36% and 15% respectively.  In another KFF study, in 2018, the spending on Medicare after deducting Medicare premiums was about $605 Billion.  The study projected in 2029 this amount would more than double to almost $1.3 Trillion.

By the way, anyone who does not want the government to be involved in health care and are happy with Medicare should take a personal time-out.  Medicare is government-run health care or in other words, socialized medicine.

Our current system of paying for health care, in my estimation, is not sustainable.  But I do believe the per capita cost of health in the US can be significantly reduced by reducing administration costs, requiring complete transparency of all health care costs.  In addition, the increased use of A-I/Automation by providing early diagnosis, treatments, and health care history has the potential to greatly reduce overall health care costs.  These are a few, there are more options to reduce overall costs.

One last thought. One option is simply to enable all US citizens to access the same health care plan as members of Congress.  It is a high-quality plan and is very affordable, for them.  Members of Congress and their staff have essentially the Gold Plan under ACA which is similar to a high-quality health insurance plan from a large employer.  Congressional members and staff pay 28% of the total premium while the rest, 72%, is paid through Federal Revenues, [that's us paying taxes].  If this plan with 72% paid or subsidized from Federal Revenues is good enough for them, it’s good enough for the rest of us.