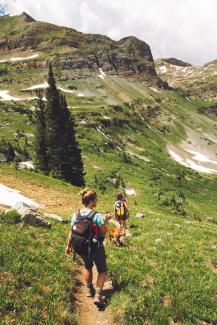 "Where are the pubic bathrooms?"  The lady who asked me this question was hiking Beehive Basin in Big Sky, MT as part of two families with young children.

Beehive Basin is a premier hike in Big Sky, MT.  It is a beautiful six-mile hike with the reward at the top being a small mountain lake surrounded by an awe-inspiring view of the mountains.  In fact, the entire hike is awe-inspiring but it is not an easy hike.  I would describe it as moderate plus starting at about 7,900 feet of elevation and topping out at about 9,300 feet at the lake.  For people, who are used to low elevations, it is not uncommon to see beginning hikers' minds write checks their bodies cannot cash.

In addition to doing this hike with my wife normally once a summer, the past couple of years, I try and do it once a week beginning the end of June.  In addition to the beauty and physical activity, I really enjoy watching the landscape change as the calendar moves from early summer to late summer.  I get there early and often have the place to myself going up and am able to have some solo meditative time at the top.  Coming down, especially in July, the traffic going up can be like major city interstate at rush hour.   Following are some of the questions or encounters I have enjoyed coming down.

When I see all the people using this trail, especially tourists, I do hope they are considering the funding of public lands when voting in National Elections.  The reality is the usage of public lands for recreation is increasing.  A recent study estimated nearly half of all Americans recreate outdoors and outdoor recreation accounted for over $400 Billion of GDP in 2016.  However, the percentage of the National budget spent on recreational resources has been decreasing.  Much of our public lands used for recreation are under-staffed, have substantial deferred maintenance issues, and are not adequately managed for the public's benefit, now and for generations to come.  I believe this is due to a combination of short-sightedness and ignorance by many members of Congress and other Nationally elected leaders.  One of Congress's and the Administration's responsibilities is to manage these wonderful National resources for the public's benefit and their efforts have been sorely lacking

We do not need public bathrooms in National Forests or drinking fountains on trails, but investing in outdoor recreation as part of the National Budget is important for the enjoyment of public resources, public health, quality of life, economic growth, and most important, long term preservation for generations to come.