Hiking without a Walker 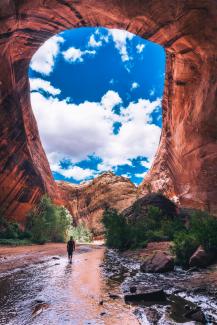 Hiking without a Walker

Kim and I had just completed the most difficult part of the hike when we ran into another couple who were in their late 40's or early 50's.  They asked us to take their picture which we did.  Then the woman said, "it is so nice to see people your age doing this hard of a hike, my parents could never do it."

After hearing this, I immediately turned to Kim and said, "did you hear, that she thinks we're really old".  I turned back to the lady and said, "yeah it's nice.  On Tuesday and Saturday mornings, the nursing home lets out for a walk. We're both feeling good today so we did not have to bring our walkers.  We do have prune juice chilling the car."

From then on I was merciless.  They had said previously they were from Boise, Idaho.  I then said I had biked through Boise when I had biked across the US a few years ago.  I asked if they had ever biked across the US.  After that, I casually mentioned we had hiked the Grand Canyon last year.  I suggested they should try it when they get older.

Fortunately for her, we came to a fork in the trail and we went different directions.  As she left, she apologized if she was insensitive.  I said no worries, and hope I had not been too tough on her.  Kim is whispering in my ear, I did not need to apologize.

Spend any time in the outdoors and you will find very active individuals in their 60's 70's and 80's.  In the winter, skiing, downhill or cross-country, along with snow-shoeing.  In the summer, biking, hiking, backpacking, kayaking to name a few.

When I biked across the US a few years ago, one-third of our group, were 60 or older.  We had several riders in their 70's, the oldest being 74.  The day we started, I saw him passionately kiss his wife good-bye. I told him to "get a room". A couple of weeks later she visited him for one of our off days.  They did.

I have done multiple bicycle tours where the oldest riders were in their 80's.  Kim is an outstanding downhill skier and she regularly skies with friends who are in their 70's and 80's.

It is true, I am getting older. But the reality is everyone is getting older. For all of us, it is important to remember every day is a gift and the alternative to getting older is not good.  But getting older does not mean one has to confine oneself to a sedentary lifestyle.  However, there are many that believe this should be the case.

I know lots of individuals of all ages who have assumptions and expectations of how individuals in their 60's, 70's and 80's should live their lives and what they are capable of doing.  I would suggest If you have friends telling you, you are too old to do something, find new friends.  If it is family members telling or making you feel you are too old to do something, spend more time with your new friends.

Getting older may mean it is more difficult to do something but it does not mean one has to stop.  A couple of winters ago I was at our place in Big Sky, MT and I saw an individual who I know walking on an icy road, using a walker.   He was in his early 80's and had serious health issues.  I am sure there were some who thought he should not be so doing. In addition to getting some exercise and enjoying a winter day in Big Sky, I also thought he was telling the world to "stick it".  He was going to do what he was going to do.

So, for all of us in our 60's and older, some of us may slow down, but a lot of us are going to keep on trucking.  And for you young folk, when you get to our age, try and keep up.