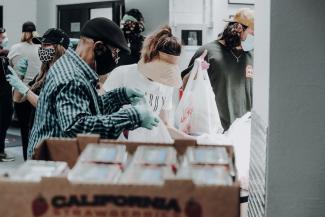 To be honest, I am not a big Holiday person. Not really a Grinch, but not that far away.  For the record, I look terrible in green.  Grinch's are green, right?

I suspect part of this is I am cognizant of the financial and emotional hardship the Holidays bring for many people.  I wonder what the first Christmas was like for my mother and older siblings after my father was killed in a farming accident.  I also remember Christmases with no gifts on the farm.  We did have plenty of food.  We must have as mom always told me I was husky.  Husky is what your mother tells you when you really overweigh and she does not want to use another word.

This Holiday, there will be thousands of families in the US who will have an empty spot at the table.  This is always true in one sense as death is a part of life, but will be different this year because of the almost 300,000 who died of the coronavirus already which will likely be over 300,000 deaths from the virus by the end of the year.

I have been hungry, but never food insecure.  There is a difference.

A report issued by Hunger Free America in December 2018 stated that one in ten working Americans struggles against hunger.  Now fast forward two years later to December 2020 and think about what that number is today.  Millions of Americans lost their jobs, through no fault of their own, because National politicians and their supporters ignored multiple warnings about the possibility of a pandemic.  Now, these Americans are hungry while politicians are well-fed, both with food and money.

And this leads to another reason why I am a Grinch during the Holidays.  I have always struggled with the opulence of the Holidays compared to the everyday struggles of the working poor in America.  Our farm family was working poor. Of course, as a well-fed husky kid who wore the same pair of overhalls every day, I did not realize it at the time,

This year is especially challenging for me on a moral or ethical basis as I try to weigh the fact that tens of millions of Americans will be food insecure over the Holidays and compare that to the hundreds of millions of dollars spent on the elections which just took place.  This does not include a reportedly almost $200 Million raised since the election by the outgoing President to contest election results.  Keep in mind that the election results have been confirmed by both judicial processes in various states along with state officials from both political parties.  I cannot imagine how difficult it must be for parents with children who have lost their jobs and struggle to feed their families to learn about millions of dollars being spent on contesting an election that had a clear winner.

This Holidays I would suggest the following:

Finally, though I have gained a few pounds the past year, I now know I am not husky.  I am just short for my weight.