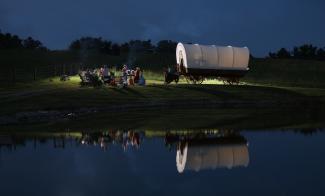 I have been spending a lot of time thinking about hope and the difference between hope and optimism.  I have seen several definitions of both.  One for me is optimism is you think you can change your partner or spouse's most annoying habits.  Hope is when you and your partner or spouse believe you have and will continue to build a life together enjoying the good times and facing the bad times together as a team.

In "The book of Joy:  Lasting Happiness in a Changing World" Archbishop Tutu and the Dalai Lama talk about hope.  In one chapter, Archbishop Tutu says, and I condensed, "Hope...is based... on the firm ground of conviction.  Hope is...in the pit of your tummy.   It's not in your head."   The entire quote is longer, beautiful and inspiring and I would recommend the book to all.

I believe our country is founded and driven by hope.  There are numerous examples, but one I think a lot about is Oregon Trail, partly because I have bicycled near several sections.  The Trail is about 2,200 miles from Missouri to Oregon.  For over 25 years, tens of thousands traveled the Trail in search of a better life.  It is estimated one in ten of those who started the journey died on way.  Those who started were not ignorant about the risks, but they had and were driven by hope.

As has been discussed often, especially recently, we are a country of immigrants.    This started in the early 1600's and continues thru today.  It is true tens of thousands were forced to the Americas due to the evil of slavery.  Others came as indentured servants.  A few came to this country with wealth seeking more.  But millions and millions left very difficult circumstances including extreme poverty, chronic hunger and continual violence, with the hope of a better life.

But there is also bad fear which I believe is a cancer on our society.  Fear can increase the “ism's” and not only lead to violence but let individuals who should know better, to accept violence as a rationale.  As a society, fear can and often does negatively affect the decisions we make and the policies we implement.

But is this fear realistic?  In the book "The Culture of Fear: Why Americans Are Afraid of the Wrong Things" by the sociologist Barry Glassner, he discusses the reasons for many Americans fears and why they are misplaced.

Where does fear come from?  The good fear is instinctual going back thousands of years as our ancestors dealt with a multitude or risks including avoiding being lunch while looking for lunch.  In today’s world, I would suggest there are two primary drivers of bad fear.  Bad fear is used by many National politicians as a means of attracting and keeping supporters.  Bad fear also, in my estimation, is the driving force for what is often called talk radio or cable TV to attract and keep an audience.  This leads to increased revenue from advertisers and ultimately greater profits.  Glassner's book supports both of these assertions.

My mother would have never been considered to be optimistic.  However, at age 38 her husband, my father was killed in a farming accident.  At that time, she and her six kids lived on a poor farm in NW MN with no running water and a coal furnace.  After his death, my mother started college obtaining a teaching degree, taught until retirement, watched all of her children go to college, and died at age 89 well-traveled and financially secure.  I guarantee you, it was not optimism that inspired her, but hope.

My children, her grandchildren are representative of millions of households in their generation.  They ignore fear driven politicians and media and are inspired by hope.  Like generations before them, they start and raise families.   They also start and build businesses, have careers, often several, all while dealing with all the day to day challenges of life.  Like the travelers on the Oregon trail, they are educated and knowledgeable about the obstacles ahead; political dysfunction, economic stagnation and climate change to name a few.  But they have hope these and other challenges will be addressed and solved.

And they should have hope.  If you Google "when is the best time to be alive?" you will find numerous articles with supporting data stating right now.

So how do we live in hope? I would suggest the following.