The Infrastructure Bill is a win for the US. 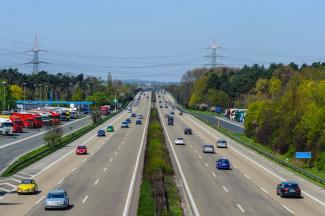 The Infrastructure Bill is a win for the US.

Years ago I was visiting with the co-owner of a small business that had just started a retirement plan with my firm. During the course of our conversation, he said the government should not be spending on infrastructure.  I asked about the Interstate system which was started in the late 1950s.  He said the Interstate system would have been better built with private funds.  Did I mention the gentleman had inherited the business?

The Federal-Aid Highway Act (also known as the National Interstate and Defense Highways Act) was passed by Congress and then signed into law by President Dwight D. Eisenhower in June of 1956.   In his State of the Union address, President Eisenhower proposed an American Interstate system. As a side note, Eisenhower’s interest in the U.S. highway system started in 1919 when he participated in the Army’s first transcontinental motor convoy from Washington to San Francisco.  This gave him direct experience in the poor quality of America’s roads. During World War II he was impressed with the German Autobahn. The Interstate system made coast-to-coast transportation more efficient.  It was the largest US public works program to date.

As an aside, do you remember the good old days before PACs, SuperPacs, and slash and burn politics when the President and Congress worked together for the benefit of the American people.  I remember them well.  Actually, I don't, I was only five at the time.  But I have read about this time period

Anyway, I have been thinking about this recently with the passage of the Infrastructure Investment and Jobs Act (IIJA) by Congress and expected to be signed into law by President Biden on November 15th. This is a significant and I believe game-changing long-term beneficial investment in and for our country. As our country has seen the federal deficit soar from $5.7 Trillion at the beginning of 2000 to $27.7 Trillion at the end of 2020, this is the first legislatorial act which I believe will actually benefit my grandchildren.  It includes a substantial investment in transportation including roads, bridges, rail, public transit, airports, ports, and waterways.  It also invests in broadband, water, the power grid to name a few.

Because we have elected too many National politicians who have been more concerned about their own personal needs than the good of the country, we have fallen behind as a country.  This Bill has the potential to help us catch up.  And it will create and continue to support good-paying jobs for millions of Americans.

The bill's passage was touted as bipartisan though it was primarily supported by the members of the current President's party and opposed by members of the other party.  I read that members who went against their own party and voted for the bill were being censured by some colleagues and some even received death threats.  This makes no sense to me.  Frankly, as an independent, in the next round of National elections, I will only vote for candidates who voted for this bill if they are running for re-election or support it if running for the first time.  I will encourage all my moderate colleagues to do the same.

One last thought, President Eisenhower was a member of the party which opposed the passage of this Infrastructure Bill.  When he was President, he worked with members of the opposite party which at that time controlled both parts of Congress to get the Interstate bill passed.  I do not think he would be very happy with his party today.  Of course, a lot of ex-presidents and or their families are not.  This bill is a win for America.