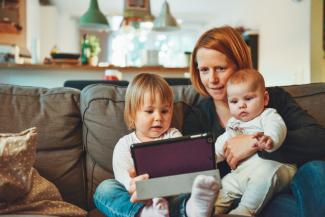 I was hiking two days ago in Catalina State Park which is near Oro Valley, AZ and witnessed a feat of incredible strength and athleticism.  The hike is a moderate plus out and back, close to 6 miles roundtrip.  The first mile is pretty easy, but after that, the hike is mostly vertical with a lot big steps and climbing over rocks.  [Ok, in the interests of full disclosure, for those who are not so vertically challenged, some of the steps were not so big.]

Anyway, I had reached my goal of a group of pools and waterfalls which with all the recent rain in AZ, were very impressive.  I had just started back when I saw young lady come prancing towards me like she was walking on a sidewalk, except she had a child's back pack on her back, and she was carrying the child, about age 1, in the crook of her arm.  I looked at her and said, "that is one of the most impressive athletic feats I have ever seen."  Then I said, "women are so much stronger and tougher than men."

A few years ago, the day after returning home from biking across Iowa on the RAGBRAI, I had a pain in my leg.  Like any guy, I ignored it.  The next day, my wife suggested I go see a doctor after I broke out in cold sweat from standing up.  I said I was fine.  Did I mention women are also generally smarter than men.  A couple of days later, I called my friend who was also my chiropractor.  He said I should go to doctor immediately as I may have a blood clot. I did and I did.  Note:  When one ignores his wife and listens to a friend, do not expect sympathy or empathy from wife.

The initial treatment did not work, so I was back in the ER at night a week later and the lab tech, after doing ultra-sound, said I could not walk back to Doctor's office and had to be in wheel chair.  That was probably a good thing as my wife was getting ready to clock me for being dumb.  In the doctor's office, I was talking to the nurse who I knew personally.  I said to her, "I hate to complain about pain to person who has had three people come out of her body, but this really sucks".  She said, "Doyle, you have something the size of dime going thru something the size of a pinhole, its going to hurt". This was the most pain I had ever had at that time and I still knew, compared to women, it was not even in the same galaxy of pain.

Women are stronger and tougher than men.  Some men, who are less educated and knowledgeable, may not agree with this, but they would be wrong.

My mom was the strongest woman I have ever known.  When I was 5 1/2 my father was killed in a farming accident. With six children, ranging from 2 to 19, on a poor farm in NW Minnesota, she went to college and got a teaching degree. All of us graduated from college which was unique at that time coming from a poor farm.  In addition, with everything else, she had me and turns out I was a piece of work.  Growing up, I thought she had no patience with me. Years a later, considering what a pain in the *** I was, I am lucky she did not throw me in a snow bank and leave me.  I truly believe no man could have done what she did.  More important, there are and always have been a lot women like her.

My wife is a cancer survivor and is stronger and tougher than me.  Both my daughter and daughter-in-law are stronger and tougher than their husbands.  Both husbands would agree and would say the ladies are smarter too. My son-in-law once told me does not how my daughter does it.  Owning a business with her brother, being a mother of two, and a spouse plus all the other things she does, it's amazing.

I love my grandchildren more than anything else  and have developed a special bond with oldest who recently turned 4.  She is a bright wonderful child, but she can be challenging, very challenging.  She gets it naturally, from her maternal grandfather.  The patience my daughter has with her and her sister astounds me, especially after working all day.

If I had to make a list of the 100 or thousand or more strongest toughest people I know or have known personally, I doubt 20% would be male.  Today, March 8th, is International Women's Day.   So men, take a moment and appreciate and celebrate not just the women in your life but all women. They are stronger than you, tougher than you, and often smarter than you.