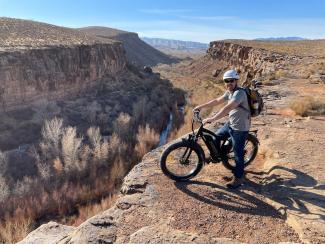 A while back, I was going up a very gradual hill on my road bike when I noticed a lady bike by me.  There is nothing unusual about me being passed while on my bike, I can go long distances, but speed has never really been my thing.  And for the record, I have the same number of women as men breeze by me.

No, what made me take notice is this lady was on a comfort bike with upright handlebars, a front basket, a bike rack, and wearing sandals.  For those who are not familiar, a "comfort bike" is normally very heavy and built for comfort, not speed or long distances.  When she first went by, I spit just to make sure I was still moving.  I then realized she was on an eBike.  The other thing I noticed she was smiling and happy enjoying the cycling experience.

Ebikes are bicycles that have built-in electric motors.  It is very important to note, eBikes are pedal-assist which means if the rider does not pedal, there is no assistance.  While still pedaling, what the eBike does is allow riders to go farther, ride uphill, into the wind and still enjoy the day.

I saw my first eBike when I did Cycle Montana in 2009 sponsored by Adventure Cycling.  One of the riders on the tour was a young gentleman who was 77 at the time.  He was riding an eBike.  His entire life he had biked extensively in Europe and Canada, especially in the mountains. At this point in life, he felt he needed some help going over a mountain pass and still enjoy the bicycling experience.

A few years later, at my granddaughter's preschool in an urban area with a great cycling infrastructure, I noticed over half of the parents were bringing their children by bike, and about half of those were riding eBikes.

Some of our good friends in Big Sky, MT at least I consider them good friends, they may not even like me.  Anyway, they bought eBikes a couple of years ago and rarely use their car for almost all their local journeys from the time the snow leaves the road until it returns in the fall.

And this brings me to the first point of this commentary.  I believe eBikes are going to revolutionize transportation in the next 10-15 years.  A December 2020 Forbes article stated total eBikes sales in 2019 was about 3.7 million units which was a 145% increase in sales over the previous years.  The article projects this number will increase to 17 million eBike sales by 2030.

Deloitte, a global consulting company in a recent report projected 130 million e-bikes will be sold globally between 2020 and 2023.  It also said that eBikes will outnumber all other types of e-vehicles on roads by the end of 2022.

if a rider does not have to worry about going uphill, into the wind, riding in inclement weather, eBikes are and will be increasingly used for commuting, personal errands, long-distance rides, and the simple enjoyment of riding a bike. And remember, since eBikes are pedal-assist, every rider is getting exercise.  Finally, after the initial purchase which is substantially less than a vehicle, the cost of operating an eBike is minimal.

The second point is eBikes are driven, no pun intended, but electricity.  [Ok, a little bit of pun was intended.].  But so is virtually everything else in today's economy.  States which can provide consistent low-cost electricity increase their chances of providing long-term economic growth.

When considering this, think about the following:

The third point is infrastructure.  Tucson, AZ, like many communities across the US has a phenomenal infrastructure for cycling.  EBikes are increasing the number of cyclists for recreation, personal errands, and commuting, but the infrastructure is already there.  By comparison, Big Sky, or Bozeman, both in Montana, have an infrastructure that is only slightly better than when Lewis and Clark came through.

Communities and states that understand the impact eBikes will make on local and state economies will be at the forefront of economic growth.  Those that do not, will not only reduce the quality of life for their residents and increase their cost of living, but I believe will also suffer economically.