It's a Tornado! No its not? 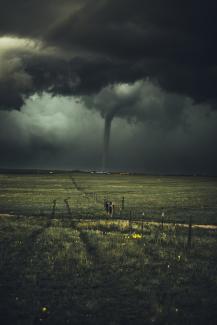 It's a Tornado! No its not?

I have never been in a tornado and never want to.  I have been in storms that contained tornadoes but had the good fortune, and it is good fortune, to have never seen or heard one up close.  When I was ten years old, during a late-night severe storm, I thought I heard a tornado about the hit the house.  Turns out it was a train on tracks that ran behind our house.  Most of the time, I simply tuned it out, but this night, thinking it was a tornado, I hit the floor running and set a new personal record from upstairs to downstairs.

In my freshman year in college, I took an entry-level Speech class.  I got one of two A's in class.  Not because I was that good, but because a bunch of upperclassmen were taking the class to fill an elective and were not particularly talented or motivated.

Anyway, I gave a speech on tornados and have been fascinated and scared of them ever since.  Tornadoes can produce wind speeds in excess of 300 mph.  Picking up vehicles, destroying buildings, and launching lethal debris are common and often tragic results of strong tornadoes. Interestingly, the Fargo, ND 1957 tornado was studied extensively by Dr. T. Theodore Fujita from the University of Chicago and was part of the basis for his development of the F system for rating tornadoes.  The 1957 Fargo tornado was eventually identified as an F-5. You can still tell where it went through Fargo.

The personal, emotional, and financial damage of those caught in tornadoes is routinely documented.  No one can argue with the incredible force and violent after-effects of a tornado.  And yet, in today's world of misinformation and denial, I wonder if that is really the case anymore.  For example, let's say there is a tornado warning for a specific area and an F5 tornado is in sight.

This is tragic on many levels.  Two examples.  It means we have a worn out overworked and underappreciated health care system.  It also means the deaths of family members, children, parents, grandparents, siblings, and friends.

There are many reasons for the increase, but I would suggest a primary reason is the groups I try to make fun of above.  They have cost all of us, personally, emotionally, and financially because we all going to pay for their ignorance and selfishness.

These types of people are always going to be around, and like debris from a Tornado, they can be dangerous.  But it is up to the rest of us, the adults in the room, to ignore them on a personal level and on a National level, make sure they are not elected or re-elected to leadership positions.

Tornadoes are real.  No one would argue that at least anyone with an IQ in excess of debris.  Covid is real, so are its personal, social, and economic consequences.

Our country faces lots of challenges right now.  Covid and the increasing costs of natural disasters to name two. We have the talent, ingenuity, and willpower to meet these challenges, but with challenges comes debris.  It's difficult to eliminate debris, but we can strive to minimize its damages.