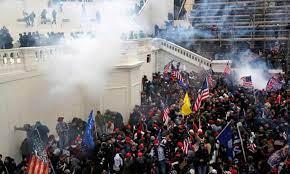 Forever dates are July 4th, December 7th, September 11th and now January 6th.  There are more of course, but these are dates that have instant recognition.  The first was the establishing of our democracy, the next three were assaults on it.

For the record, I have only read about July 4th and my mom was pregnant with one of my older sisters on December 7th.  September 11th is instant memory, I had just got done working out at home when the newsflash came across the TV screen of the first plane crashing into the Towers.  Then the second minutes later.

As I watched the assault on our capital by insurgents, I teared up.  I still tear up every time I think about this attack on our democracy.

As a Planner, I have often thought about the consequences for my personal financial security if the assault had been successful.  I think some people think if it had been successful, it would have business as usual the next day.  I don't think so, If successful, I believe the possible effect on our economy would made the pandemic look like a small wave compared to a major tsunami.  For the record, tsunami is a series of large waves normally period generated by a violent undersea disturbance such as an earthquake.

Do you really want someone in charge of your financial security who does not understand that 81.3 million is a bigger number than 74.2 million.  Or on a smaller note but equally important, 306 is more than the required 270.  There are some, a small but vocal percentage of the population who still do not accept the results.

Look at it this way, all stores track inventory.  That's how they make money. Let's say someone walks into a store and asks the manager the total inventory.  The manager  says the current total inventory which is instantly tracked by the stores scanners and computers.  The guy [its almost always a guy] says no, I think  it is much less. The manager checked inventory on his computer and said that's correct.  Again the guy says no, that's incorrect.  So the manager has the staff verify all inventory which they do and there is no change.

The guy leaves and tells others the manager is lying about inventory. What can the store do.  So the manager brings in an independent auditor and the auditor confirms the inventory.  The manager then runs an ad confirming the inventory but prices will be going up do all the extra costs of the various recounts which were totally unnecessary.

Do you really want to trust your economic future to a group who cannot count, do not know if one number is bigger than another.  Or when told the bigger number is correct, say its not.  And then when it is verified it is correct, still deny it.

For example, the Medicare Trust Fund Part A is set to run out of money by 2026.  Or the Social Security Trust Fund is set to run of money in 2034 at which time, if Congressional action is not taken, social security benefits will be reduced to about 78% of the current amounts as they will be based on ongoing FICA taxes. Do you really trust adult problems like this to a group cannot count or simply deny the facts.

Or  what would have happened to the stock market.  The stock market as measured by the S&P Index declined -33.5% from 2/20/2020 thru 3/23/2020 as the economic risk of the pandemic made investors very nervous.  What would happened if the attack on the had been successful. I suspect the stock market would have declined and kept declining.  Here's why. Civil war's are almost disastrous to economies.  Our Civil War destroyed the South's economy while the North's grew because of the manufacturing sector.

I would argue the Insurrection would have led to a different type of civil war, not defined by clear state boundaries, but political divisions between communities, within states and possibly one state next to another in any part of the country.  There is assumption by some if the insurrection had been successful the Biden voters would have said something like, "well that was unfortunate, have a nice day".  I do not think so. I believe millions of these voters would have fought back figuratively and literally.  And there you go.    Possible civil war and economic collapse.

January 6th was one of the worst days of my life.  I am little bald guy in the middle of nowhere who has never belonged to a political party.  But I will work every day to protect democracy for my grandchildren and I will never support any political candidate who does denounce the insurgents on January 6th as an attack on our democracy.