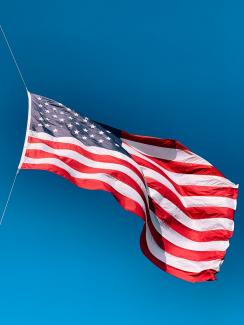 We just celebrated another birthday of our country and the democracy that started in 1776.  I have thought a lot about this past year.  Our democracy has been at risk many times since its inception.  Of course, declaring independence in 1776 is one thing, but winning the Revolutionary War was an entirely different thing and required great sacrifice by our founding fathers, but even more important the sacrifice of the normal everyday people who supported, fought for, and often died for our independence.

Our democracy was at risk during the War of 1812 and almost lost during the Civil War.  But we survived, grew, and prospered as a country.

Our democracy may have been at risk at WWI, for sure it was with WWII.  Though obviously very difficult time periods, I doubt if our democracy was at risk with the Korean Conflict, Vietnam War, Watergate, or the ongoing war in Iraq and Afghanistan which may be coming to an end.  The Cuban Missile Crisis is a different story in my estimation.  If that had escalated to nuclear war, I doubt if any of us would be here today to talk about it.

In my lifetime, I truly believe the greatest risk to democracy was the Insurrection on the Capital which took place this past January.  It was not just an attack on our Capital, but democracy itself.  The current President won the election. There is no doubt about this. I thought of listing all the data be it state or federal that supports this, but all this information is public and the vast majority of Americans accept and support the results.

We talk about bravery since the inception of our country.  When I think of bravery today, I think about the Congresswoman from Wyoming who was a leader in the ex-president's party, or the Congressman from Illinois from the same party or the Senator from Utah who was his party's presidential candidate in a prior election, all put commitment to our democracy over and above their own political future.

While the Congresswoman from Wyoming was being censured and demoted by her own party for speaking the truth, I read an interview that including two of her constituents who had voted for and supported her.  One said she was correct and spoke the truth.  The other agreed, but then said she went against the party and for that, she should have been censured.

As a moderate independent, let me be clear, if your political party places party loyalty above speaking the truth, your party is on its way to being obsolete and a future footnote in history.  The majority of American people believe in the truth and value true democracy.   Any attempt to take it away from us will be met with great political resistance.

In the most scrutinized election in our history, there was no evidence of any significant voter fraud.  A Washington Post article dated 5/4/2021 detailed a review of local news reports and found a total of 16 people across the country charged with voter fraud.  This is one charge of voter fraud per 10 Million ballots.  Yes, that's 10 Million.  Some of the fraud was for trying to vote for a deceased relative.  One was a man who voted and then tried to come back to vote again as his son.  For the record, he said he was voting for the ex-president.

Yet some states are striving and have enacted regressive voting requirements making it much more difficult for some US citizens to vote.  This is another attack on our democracy.  Because for the vast majority of us who believe in democracy, we want everyone to vote and we want to make it easier to all citizens to vote.  If your political party's position is to restrict voting, again your party is on the wrong side of history.

I am a fan of Colorado's voting law in which every registered voter receives a ballot 15-20 days before the election and the majority of voters upon completion of the ballot simply drop the ballot in the mailbox or secure dropbox.

As I think about another 4th, I am thankful our democracy still exists.  I am also thankful the vast majority of us believe, value, and support our democracy.   If we do not agree with the results of an election, then we must work harder for policies we support in the next election.

Throughout our history, we have had individuals and groups who worked against or democracy for their own selfish interests and that is taking place now with a small percentage of our citizens.  Some are misguided, some are ignorant and some personally know the results of the election are valid but for personal self-interest financial reasons supported deniers.

But our country has withstood challenges to our democracy for 245 years and we will continue to do so.  Today,  I choose to focus on the above-cited leaders of their party who put democracy above their party's politics.  I also choose to focus on the vast majority of us who love our country, support democracy and support a system of voting in which not only are all citizens encouraged to vote, but voting is easily accessible to them.  To me, that is part of what it means to be an American and celebrate the 4th.