A Knee Break and A Moment of Winter Reminiscing 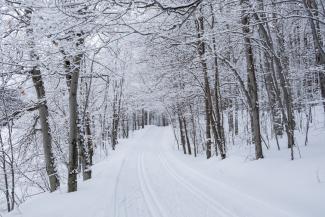 A Knee Break and A Moment of Winter Reminiscing

I was looking out the window at the mountains reminiscing.  At this point of life for me, there is a really danger in spending too much time thinking about things I have done and not enough time thinking about what I am going to do next.  However this time, I had a good reason.

I have been extremely fortunate with my knees to date.  When I biked across the US, I had some soreness the first few days, but then it was suggested that a good way to reduce soreness and inflammation is to take ice baths.  I was one of the very few to implement the suggestion.  There was a reason for that, it really sucks.  Anyway, at the end of each day on the tour, I filled the tub with cold water and buckets of ice and sat in it for 20 minutes.  I used a timer so I would not cheat.  It eliminated any all or inflammation and when I say all, I mean all.  I developed a new found respect for athletes who take ice baths after every practice and game.

I have also had some knee pain when going down a steep decline while hiking, but that has been about it until about a year ago.  I noticed once in awhile either walking or hiking, if I stepped wrong I would have intense pain in one of my knees. Sometimes it would go away quickly and other times it took awhile.

It never bothered me biking so my initial treatment was the trie and true method for guys, I ignored it except when it hurt, and even then did my best to ignore.  As the months went on, the pain happened more frequently, sometimes I would just step wrong in the house, and the pain was more intense.  So I upped my treatment, I ignored it harder.

Last fall I decided my treatment was not working, so I decided to see a Orthopedic Doctor.  The most shameful moment of this was the realization that I had been doing was the same as the politicians and their followers who ignore a problem and hope it goes away.  It does not work and neither did my treatment.  Anyway, I saw the Doctor and after x-rays and scans, the Doctor said "at your age".  Please note, when a Doctor says "at your age" nothing good follows.  In my case, it is a minor problem.  I have a partially torn meniscus in one of my knees and I will eventually have it fixed.  In the meantime, so far biking does not bother it and walking or hiking with a knee brace has really helped.  But the Doctor said cross-country skiing would not be a good idea.

So I found myself sitting on the couch looking at the snow in mountains which as always were beautiful.  I started thinking about the best days I had downhill skiing, cross-country skiing and snow shoeing.  There are literally hundreds and hundreds of them to choose from, so I decided to limit to days when I was by myself.  Still a lot of options , but picked out three.

For downhill skiing, it was my second year.  Please note, I was 53 the first time I ever went downhill skiing and this was the next year.  This was also the day I felt I went from a timid beginner to an intermediate.  It was a bluebird day with a lot of snow from the night before and the runs were perfectly groomed.  Not at all crowded so it was basically ski down and hop on the lift to go back up.  I lost count, but total runs was well into the 20s.

The other highlight from this day is one time I ended up on a lift with three women from New York City.  When asked, I told them though I had place in Big Sky, but I was from Fargo, ND.  One asked if knew so and so who lived in Grand Rapids.  I said Grand Rapids in Michigan.  Turns out geography was not taught at the prep school they attended.  I still feel bad about asking them how they liked Idaho so far.  The rest of the time on the lift they kept looking at each other wondering if I was kidding or they were actually in Idaho.

For snow shoeing the best day was when I was working my way through the woods when a fairly large elk herd made its way across ridge just above me.  I took a video of the entire process.  Two of the elk stopped and took pictures of me.  Very cool moment for all of us.

And for cross-country skiing it was at Lone Mountain Ranch.  First of all, it is important to point out LMR is one of the premier cross-country ski places in country.  I had done the Walking Jim trail quite a few times, but this was first time I worked my way up Summit and came down Mongolia.   I had the place to myself.  It was hard work getting to to the top, but the scenery was breathtaking and obviously the experience memorable.

Ok, enough thinking about stuff done and time to start thinking about doing.  Because at any age, doing is what gives you the opportunity to reminisce in the future.