Labor Day, enjoy your brat, but think about the bravery and sacrifice behind the Day. 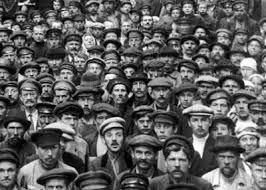 Labor Day, enjoy your brat, but think about the bravery and sacrifice behind the Day.

As a farm kid, at least until age 10, I knew very little about farming or all the "handy" things farmers in that day and age were expected to do. In junior high, I once got a D in shop class which was generous given my performance or interest in the class.  For years I thought a screwdriver was an adult drink and a wrench is what happens when you hurt your back.  I am not handy and have no interest in being handy.  Very unusual for a farm kid.  A few years ago, an older cousin told me after my father died in a farming accident, my mother told my uncle who farmed with my dad that I was not allowed to be anywhere near the farm machinery not to mention actually work on the farm as my older brother had done.

The reason is farm work was dangerous.  My mom obviously would have known this first hand.

My mom would have also known the dangers of work during the Industrial Revolution and thereafter.  In fact, in part, the Industrial Revolution which led to Labor Day.    During the late 1800s into the early 1900s work was hard, very very hard.  According to one study, the average American in the late 1800s worked twelve hour days, seven days a week to make a minimal living.  And many of these workers were children, some as young as five or six years old.

In addition to being hard, work was dangerous.  Though records were poorly kept, one study estimated in 1900 there were 25,000 to 35,000 deaths in factories and another million workers injured.  Many of these were children.  This does not include deaths and injuries for workers in mines and railroads or other occupations.

In the late 1800s, labor unions began to appear which among other things, organized strikes and rallies to protest long hours, low wages, and unsafe work conditions.  It was not uncommon for these protests to turn violent.  For example, during the Haymarket Riot in 1886 in Chicago, several policemen and workers were killed. In 1984 employees of the Pullman Palace Car Company went on strike to protest wage cuts and the firing of union representatives.  This led to a boycott of the Pullman railway cars, which led to the federal government sending troops to Chicago which caused more riots and the deaths of over a dozen workers.   Sound familiar?  People protesting to make their lives safer and better.

Not surprisingly, employers did not want better work conditions, fewer hours, and higher pay.  They often said it would lead to higher costs for consumers.  Again, sound familiar?  Hence, the violence at rallies and protests.

Trying to make nice with workers, in 1894 Congress passed an act which was signed into law by President Grover Cleveland establishing Labor Day as a National Holiday.

It took many more years of protests, rallies, violence, and deaths before laws were passed eliminating child labor, make work conditions safer, and better hours and wages for workers.

So as you enjoy your brat and favorite adult beverage, on Labor Day or any day for that matter, I hope you will take some time to think about the bravery, sacrifice including loss of life, which led to better wages and working conditions for American Workers.  I know I will.

And by the way, I have learned to do some handy stuff.  But I choose not to out of respect and honor for my mother.