Markets Can Go Down 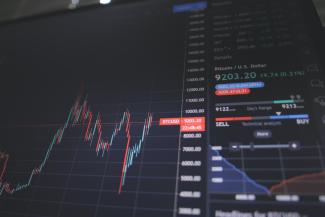 Markets Can Go Down

Back on the day, I was regularly invited to a money management "conference" in Newport Beach, CA.  Conferences like this are when money management companies bring financial advisors to their offices to tell the advisors how great the company is.

Since all most all the advisors at the conference were from CA, I was like a pair of old brown shoes at a fancy wedding.  It was interesting though, when other participants found out I was from Fargo, it was like they had just found a shiny new penny.  After determining we did not live in sod huts in Fargo and had electricity, the first thing they asked me was if I had seen the movie "Fargo".  When I said no, they got this surprised look on their face and wondered if we had movie theaters in Fargo.  I did impress them with some trivial as one of the main characters was an actress who actually lived in Fargo when she got the role.

One of the questions for the tech fund manager was the future of technology.  The manager said if technology was like a baseball game, we were in the second inning.  He talked about the things coming in technology and everything he talked about and much more happened.  But from early 2000 towards the end of 2002, as the tech bubble busted, his tech fund declined about -80% in market value.

For the record, over the same time period, the small-cap value fund increased in market value and was one of the top performing funds in the market.

From 2000 into the fall of 2002, the stock market, as measured by the S&P Index, declined by about -40%.  Some "experts' wanted to blame the Administration at that time for the decline just as if there is a decline today, some politicians and media outlets will blame the current Administration.  The reality is the market increases and decreases are much more complicated than this.

Let me give you an example.  In the late 1980s, some of the budding "almost" geniuses on Wall Street were introducing "program trading".  They told their clients they would not lose money in the stock market because if it started to go down, they would instantly sell their clients out and protect their market values.  Turns out if large institutions all put in sell orders at the same time and there are no buyers, the stock market can decline very quickly.  On October 19th, 1987 the stock market declined -23% in one day.  There were multiple reasons, but an accelerant was program trading.  Like I said, almost geniuses.

In the fall of 2008 when the stock market literally fell off the table, there were multiple reasons including some hedge funds had used leverage or margins to buy stock. This is when a hedge fund borrows money against existing stock to buy more stock.  If it goes up, the hedge fund makes more money for themselves and their clients.  On the other hand, if the stock market begins to decline quickly, the hedge fund has to cover its margins by either adding cash or selling the stock.  In the fall on 2008, as hedge funds had to cover their margins or be sold out, wave after wave of sell orders hit the markets driving them down quicker and farther.  The hedge fund managers who had socked away their own money outside of the hedge fund or had family money were fine.  Those who did not are still working the night shift at convenience stores.

So what have we learned so far.  Well since 1987 there have been three major declines.  There have also been other declines like in early 2020 as the pandemic scared many investors.  This was neutralized by flooding the economy with cash funded by deficit spending.  Another example of charge it and send the bill to the grandkids.

But what it also means is most of the time from 1987 thru 2021 the stock market increased.  Sometimes a lot, sometimes a little.  No guarantee for the future, but nice to know.  This is one reason the stock market can help individuals and households build personal wealth.

Another lesson is beginning in 1987 and every decline thereafter, technology accelerated the decline.  Maybe the decline would have been the same anyway, just longer, but technology certainly accelerated it.  Leverage also accelerate declines.
Finally, some declines like 2008 into 2009 are across the board.  Others like 2000 thru most of 2002 are varied with some asset classes declining and others increasing.

What should you do.  Well I cannot give investment advice in a commentary, but I would make the following comments.  Know what you own and remember, past performance actually does not predict future results.  Play the long game.  And if you are close to or retired, have a minimum of five years income in minimal or low risk accounts and I would suggest at least eight to ten years.

Finally, according to Federal Reserve study cited in an October 2021 CNB report, the wealthiest top 10% in the US now own 89% of all US stock in one form or another.  Again, does not guarantee the future, but always good to have the big dogs on your side.