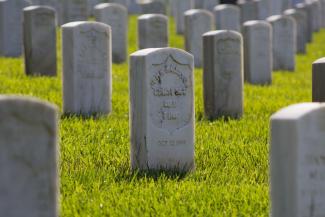 While visiting our son and his family in Minneapolis, my wife and I attended a very meaningful service at the First Unitarian Universalist Church in Minneapolis.  The theme for the whole service was Memorial Day, remembrance of all those who served in the Military and gave their lives for our country.  The service also addressed the emotional and financial costs of war.

What I did not realize until the service is there are records from the New Your Tribune and the Charleston Courier found by David Blight, a professor of American History at Yale University, indicating on May 1, 1865, a crowd of about 10,000 people, primarily freed slaves had a parade around the Charleston race track with school children carrying . bouquets of flowers.  https://www.history.com/news/memorial-day-civil-war-slavery-charleston  The commemoration was in memory of the soldiers who fought and died for their freedom.

Historians have estimated there were over 600,000 to 700,000 casualties during the Civil War.  This does not include civilian deaths.  There are some who talk about the glory of war.  In all wars, men and women fight and die bravely, but I have never thought of war in terms of glory.  Necessary at times, but terms I think of are brutal, ugly, inhumane devastating in both human and financial costs.  There are many books, both fiction and non-fiction on the Civil War,  and I have read a few.  Recently, I read a novel, "The Scorched Earth" by William Gear, which in my estimation, captured as much as any novel can, the brutal impact the Civil War had on both combatants and civilians.  It is not for the faint of heart, but I would argue it is Gear's best work.

It is estimated that the total number of deaths globally in WWI including both military and civilian is about 20 million.  This does not include the wounded.  In WWII, the total global deaths including both military and civilian deaths are estimated deaths range from 70 million to 85 million.  This includes civilian deaths from famine and decease.  The death of millions is one of the many reasons why I do not find glory in war.  Bravery, duty, honor self-sacrifice, yes, glory, no.

The numbers, both military and civilian, are still coming in from today's wars.  The economic costs increase every day also.

It is important that we remember and honor all those who have served in our Militaries.  Not just Memorial Day, but all the time.  As part of this remembrance, I would suggest we think about the global human and economic costs of war.  Albert Einstein wrote:  "I do not know with what weapons WWIII will be fought, but WW IV will be fought with sticks and stones."  I agree with Einstein's quote.  I believe our personal and global financial security lies in economic competition and overall peace, not war.