One way, wrong way, and learning the right way. 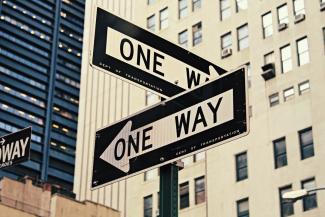 One way, wrong way, and learning the right way.

My first job out of college was for the Admissions Office for the College I had attended.  I had been told to attend a meeting in downtown Minneapolis on a Friday afternoon.  The only other time I had been downtown was for the state wrestling tournament in high school and delivered on a school bus.  Anyway, as a kid from a small-town driving in a big city downtown area, I got totally lost and turned around.  Eventually, I ended up going the wrong way on a one-way.   As to be expected, other drivers were not happy with me, though some did indicate I was number one. I made another quick turn and again was going down the wrong way of another one-way.  This led to more unhappy drivers, though once again many thought I was number one.  I finally figured it out and showed up late to my meeting.

I thought about this a lot this week as I read an article written by a long-time friend of mine who happens to be black. He wrote an article which was published in a professional magazine.  In the article, he talked about being turned around on a one way in downtown Minneapolis where he was a new law school student from Chicago.  He was driving with two friends who happened to be white.  He was pulled over by the police and asked to get out of the car while it was completely searched.  The officers also made a point to ask his friends, who were women, if they were in "danger". They said no and eventually, all were let go.  For years, he has wondered if he had been by himself, would this have been a George Floyd moment for him.

In the article, he then talked about attending a Black Lives Matter rally with his beautiful bright 17-year-old bi-racial daughter.  The rally was organized by other teenagers in the city in which they lived.  As with most BLM rallies, this one was peaceful.  The objective to promote equal justice in the law enforcement and judicial system.

Before going further, it is important to understand these young protesters, as with others throughout the country, are likely familiar with many parts of Black History which many who look like me are not.

February is Black History Month.  One of the things I think about during this month is the little I learned about black history when I was growing up.  If grades are an indicator, I was a pretty decent history student which was different from many other subjects where I felt studying was taking an unfair advantage over a test.  [I told my kids growing up, do as I say, not as I did.]  I remember touching on slavery a bit as part of the Civil War but was not until college that I realized how little I knew along with the inadequacy of my education in this area.  That began a lifetime of trying to become more educated on black history, not from my perspective, but from an accurate historical perspective.

The good news is I have learned a lot.  The bad news, is I have a really long way to go.  The really bad news is over the years I have met very few people who look like me who know more than me about the subject.  That is not a compliment for me or anyone else.  Our job, yours and mine, especially during black history month but actually year-round is to learn about black history from an authentic historical perspective.

In so doing, our challenge is to leave our prejudices and stereotypes behind.  Not easy, but to really understand current events, one has to have an accurate historical perspective.  In so doing, one never learns anything from talk radio or cable TV political talk shows.

One last thought.  I can never understand what it has been like to walk in my friend’s shoes.  But I can try.