Our Olympic Athletes are one of the reasons USA is Great. 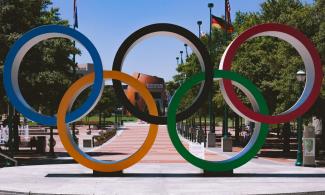 Our Olympic Athletes are one of the reasons USA is Great.

I was an above-average small-town athlete, which is the equivalent of saying in a group picture with rows arranged by height, I would be at the side of the front row or in the middle of the second row.

In football, I was a small but slow running back.  I had a winning record in wrestling, but in my start as a Freshman on the varsity, I got pinned in 14 seconds by a future state champion who was a senior.   I played baseball and my football coach made me go out for track.  In a track meet as Freshman, my coach entered me in the shot put.  Watching the juniors and seniors warm up and seeing they could all throw it twice as far as me, I hid the shot and told my coach I could not find it. He also put me in the 100-yard dash and I tied for last in my heat finishing just before the runners in the next heat caught up to us.

In college, I took second in my dorm ping-pong tournament losing to a guy from England 21-1.  It was not that close.

Since high school, I played tennis for years, did a mini-triathlon winning my age group. I was also last in my age group but not last overall.  I can swim, slowly, used to run, also slowly, canoed, kayaked, biked, and picked up golf a few years ago.  Played volleyball which has a huge bias against less than tall people.  Still just a small-town athlete.

I enjoy sports and really love the Olympics.  Watching athletes from all over the world compete in athletic events, some well-known and some less well-known like fencing, which I tried in college, but realized being stabbed by pointing things, even with protection, was not my thing.

And I take great National pride when a US athlete wins a medal.  The reality is I take great pride in any US athlete competing in the Olympics even if they do not win a medal, they still worked just as hard for years as the medal winners, just were not as good.  And they represented our country to the best of their ability.

They all made me proud to be an American.

I especially was proud and thankful to Simone Biles who is one of the greatest Olympic gymnasts ever winning a total of seven Olympic medals over the years.  She has 25 world medals.  When she withdrew from events due to mental health issues and was public about it, I was especially proud and thankful for her.  Many of us are not strangers to mental health issues and her public stand is more important than all of her medals. For the record, she was diagnosed with the "twisties" which are well known to gymnasts.

For years, I have been a huge women's soccer team.  Over the years, they have made the USA proud with four Olympic gold medals and four World Cups since 1991.  Their bronze medal this year was not a disappointment, they got beat by a better team in the semis.

It was sad but not surprising that a photo was falsely circulated indicating some players kneeled at the Olympics. That is not true. It was a February 18th match when some players did kneel and others stood.  Before the USA Sweden opening match, players from both teams and one referee kneeled as a protest against racism and discrimination. All players stood for both teams National anthems.  I would not be surprised if the individuals who circulated this false narrative are not some of the same individuals who have been denying the January 6th attack on our Capital was not an insurrection. As stated in the Congressional Insurrection Hearing, it was defined as an act of domestic terrorism.

Our National Women's soccer team makes me proud to be an American as do all of our Olympic athletes, those who won medals, and those who competed to the best of their ability but fell short. They are all one of the reasons America is great.  Those that criticized them unfairly for one reason or another are one of the reasons it is a continuing challenge to keep America great, but like our Olympic athletes, the majority of us will work hard to overcome them.