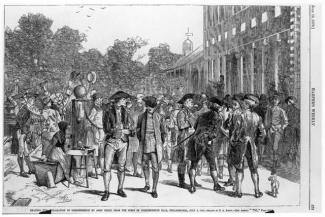 We are celebrating July 4th.  At the time of the Declaration, historians estimate about 30-40% of those living in the Colonies were Patriots, in other words, committed to the Independence of the Colonies from England.

Historians also estimate about 20% of the Colonies were Loyalists.  Loyalists did not support the Revolution War, they wanted to remain subjects of Great Britain and the Monarchy.

The rest were neutral.  Some did not care, just did not want the War to affect them.  Others did not want to take sides worried that if they took one side it would affect their relations, often commerce relations, with the other side.  As the War progressed, many of those originally neutral had to take a side, and most often this was to become a Patriot.

Of the Loyalists, at the end of the War, some stayed, some returned to England, and it is estimated roughly 80,000 escaped to Canada.

Of the Loyalists that stayed, and I have seen no research on this, but I am assuming some of their decedents became Insurrectionists.  They stormed the Capital, wanted to hang the VP at that time, wanted also to kill members of Congress with whom they disagreed, and cause bodily harm to the Capital police.  I am also assuming other decedents became politicians and their supporters who, with no supporting evidence, in fact overwhelming evidence to the contrary, continually lied about the outcome of the past Presidential election.

Again with no research, I am also assuming the decedents of the Patriots became the Capital Police who literally put their lives on the line on January 6th.  They are also the majority of Americans who know there was no fraud and the election results were accurate.  Decedents of Patriots are also the members of Congress who continually fought back against the former President and his supporters who continue top promote the "Big Lie".

Of special note as Patriots are the Congresswomen from Wyoming and the Congressman from Illinois who are on the Committee. Their credentials as conservative members of their political party are without question, but when they had to make a decision, they chose to be a Patriot and not a Loyalist or worse, some one who tries to be neutral for personal political and economic reasons.

Its interesting, sad and scary, the Congresswomen, even with impeccable credentials, may lose her primary bid because the preservation of democracy is more important to her than her political aspirations.  This is the definition of a Patriot.   Sometime ago I heard two members of the Congresswomen's political party in Wyoming being interviewed and one said he would not vote for the Congresswomen even though he knew she was correct,

This ultimately means for this individual and millions like him, the lie is more important than the truth.  And if the lie wins out, then that will be the end of democracy in the US.  What our founding fathers started on July 4th, 1776 will end under our watch.

Going forward, if you are trying to be neutral, you will need to pick a side, Patriot or Loyalist.  If you are a Loyalist and want to return to a dictatorship, then you need to be defeated.  Sadly, if you are defeated, and is a big if, there is are only a few places for you to go.  Canada will not want you and neither will Great Britain.  Russia is your best bet and maybe the former President can put in a good word for you since he thinks the the President [dictator] of Russia is a genius.

If you wish democracy to continue for you, your children and grandchildren when you vote for any politician running for office going forward, I would strongly suggest you ask the individual running for office to answer the following three yes/no questions.

If any of the answers are no, then this person is not qualified to be elected because he/she is working towards the end of democracy in the US which trumps [no pun intended] all other political issues.

If you are one of those who do not accept the "Big Lie" but plan to vote for politicians who answer no to one or all of the above, I hope you read my next blog which will address how the "Big Lie" may not only be the end of democracy, but also your personal financial security.