Peace On Earth, and NO Yes Buts 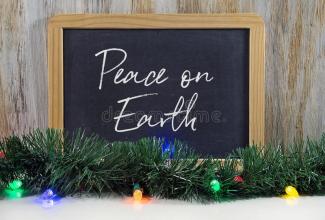 Peace On Earth, and NO Yes Buts

A long long time ago, I pulled the Christmas tree on top of me.  I would have been 7 or 8.  It was a year the poor farm on which we lived before my mom became a teacher made enough money to have presents.  When my mom confronted me, I was lying on the floor underneath the tree, I said "yes but".

Yes but is what we all say when we are caught doing something wrong.

Yes but is also what many say when politicians and their supporters say something that is clearly wrong.  I have been thinking about this a lot during this Holiday Season.  Since I can remember, every Christmas service I have attended has proclaimed "Peace on Earth".

But what does that mean?  Is it an easy expression or an actual objective.

I believe the two white members of Congress who threatened their colleagues did evil. The shooter in Michigan did evil.  But so did all the individuals, gun lobbyists, and elected leaders who made it possible for this troubled individual to shoot innocent students.

If Peace on Earth is just expression then it has no meaning.  Its the same as saying it is cloudy outside.  But if Peace on Earth is an objective, then it starts with acknowledging evil and no yes buts.  The two white members of Congress committed evil acts.  If you look the other way and say yes but, you are accepting and condoning evil.  If you acknowledge the shooting in Michigan and every other school shooting, but then say yes but, then you are accepting and condoning these tragic acts of violence.

By the way, if you think you understand my political and economic beliefs based on the above, instead of having the Holiday spirit, you have been drinking way to many spirits for the Holidays.  But I do know the difference between evil and Peace on Earth.  If you are part of the yes but crowd, then I would suggest you spend part of the Holidays in self-reflection and meditation.

We are a long ways from Peace on Earth.  But as a person of faith, I believe Peace of Earth is not just a saying, but an objective.  And though we may never get there, we are always moving closer or farther away.  The above events all moved us farther away. So for the Holidays, let's all try and move us closer, and no yes buts.