The Post Office. The basis of both democracy and business in the US. 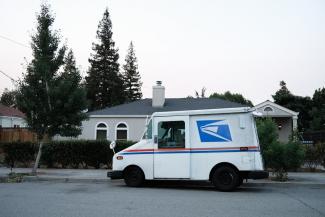 The Post Office. The basis of both democracy and business in the US.

My kids would never believe this, but I actually received my first romantic letter in the spring of my senior year in high school.  We met at the state wrestling tournament.  I was a wrestler from the west part of the state and she was a cheerleader from the east part of the state.  We wrote back and forth for a while, but eventually, we went our separate ways.  I went to college and she joined the Navy.  I assumed my prose at that time was so inspiring she joined the Navy to see the world.  Or it is possible she realized she needed to increase the sample size for potential boyfriends.

According to an article in the Smithsonian Magazine dated September 9, 2020, the first Postmaster General was Ben Franklin who was appointed by the Continental Congress in 1775.  Franklin had experience with colonial mail as he oversaw Great Britain's mail system from 1754 to 1774.  The Post Office was the first, and arguably the most important function of the new government.

Using the same article, and others for that matter, it clear our founding fathers believed the Post Office was a cornerstone of democracy. Led by James Madison in 1792, a policy was implemented in which higher postage for letters subsidized the delivery of cheap, uncensored newspapers. This policy helped "free speech" to be heard throughout the new country.

The Post Office has also been the cornerstone of many, probably almost all businesses throughout our history including today.  When I first started my firm in the early 1980s, there was no email, almost all forms, documents, and client communications were sent through the Post Office.  I owe part of whatever success I have to the Post Office.  So does most any other business in America.

Though many of us remember the Sears catalog which started in the late 1800s, the first mail-order catalog was Tiffany's Blue Book sent in 1845.  In 1872, Montgomery Ward produced a mail-order catalog.  Free delivery in rural areas started in 1896 making the mail-order business even more profitable.  Today, I would strongly argue that both Amazon and Netflix owe their success today to the Post Office.

Often we hear about the financial problems facing the Post Office and some today think the Post Office should be run like a business.  They are incorrect.  The Post Office is a public service.  Don't believe me, talk to Ben or James or any of our founding fathers.

With the better use of technology, human resources management, delivery fees and requirements, and the elimination of the pre-funding mandate, the Post Office will continue to cash flow.

Some have been worried about election fraud.  This is a bogus claim.  A Reuters article dated September 9th, 2020 said "experts say election fraud is vanishingly rare in the United States, however, where nearly one in four voters already cast a mail-in or absentee ballot in 2016".  This article, along with every article I have reviewed on voter fraud states voter fraud is extremely rare and then details all the precautions that states have implemented to prevent it from happening.

The Post Office is not perfect, has problems, but is also one of the foundations or our democracy and a primary reason for US businesses, large and small, to have success.  Going back to buying a stamp and mailing a letter to my cheerleader friend in a different town to stopping by Post Office last week, almost all of my experiences with the Post Office have been favorable.

It is important to note there are incompetent workers in all parts of our country, business, large and small, non-profits, and government agencies.  Eventually, most of these incompetent workers are fired or move on their own. Some never find a job they can do well.  Others end up in Congress but I repeat myself.

One last comment.  Someone in Utqiagvik [formerly Barrow] Alaska who wants to skip email and send a romantic letter or card to his/her interest in Key West, Florida, a distance of almost 4,300 miles, can do so with a first-class stamp for $.55.  That's pretty amazing.