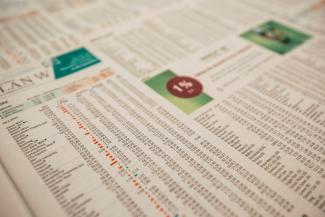 A couple years after college graduation, I bought my first new car.  I had bought two used cars while in college from my work earnings, but this was my first new one.  It was a red Fiat Spider Convertible which I financed.  You do not see many of those in Fargo, especially in January.  I was single, still had a fair amount of hair and had paid off all my students loans.

I worked 25-35 hours a week my junior and senior years and after graduation, took a position in the Admissions office of the college I attended.  My starting annual salary was $8,700 which was reasonable at the time.  At that time, this would have been over four times the annual cost of the neighboring state University and was over three times the annual cost of the private liberal arts college I attended.

Professions pay differently, but today, a starting salary of four times the same public state University, would be over $86,000.  Today, a salary three times the private college I attended would be about $116,000.  For the record, according to a Forbes article, the median annual salary for a college graduate from ages 25-34 is $59,900.

If you are wondering why student debt is so high right now, its not because of students, it is because how our economy has changed over the past fifty years with the consistent devaluation of the value and buying power of work.

Many Trump supporting members of Congress have objected to the new student loan relief plan. However, some of these same member of Congress benefited directly from the PPP which was initiated in April of 2020.  The program was to help small business, especially maintaining employees early in the pandemic.  There was a forgiveness provision so borrowers may not have to pay back the money.

According to a recent Forbes article, $800 Billion was issued in three funding rounds.  Over 90% of the loans issued in 2020 have been forgiven.  Though it is clear the program saved many jobs which was its purpose, the article estimated only about 25% of the money issued to companies was used to protect paychecks and a majority of the companies who received funds still laid off employees.  The remaining estimated 75% went to business owners, shareholders, suppliers and creditors.

The objective of PPP was to rescue businesses and maintain our economy during a very difficult time.  Though it is estimated about 10% of PPP loans were fraudulent, and some economist believe the program was not that effective, other economists feel it was overall beneficial.

And here is the point of all this.  The assumption by many Republicans is student loan forgiveness will not benefit the economy.

I would respectfully disagree and suggest the student loan forgiveness plan may have a greater positive effect on the economy than PPP.  Consider this, currently student loan debt is over $1.7 Trillion almost double of total credit card debt and second only to homeowners mortgage debt.  As outlined in my previous post, the buying power of minimum wage compared to the cost of college has declined substantially over the past 50 years.  This has made it almost impossible for students to work their way thru college.

What are working Americans who qualify for student debt relief going to do with the money?  They are going to spend it.  Some time ago I reviewed a study detailing the consequences of student loan debt which included, postponing buying a house along with all items that come with a house purchase such as furniture and appliances.  Other consequences include reduced consumer spending, buying new cars, not being able  to start a new businesses, not being able to save for retirement and delaying marriage and starting a family.  The money previously made on student loans payments is going to get spent in a positive and economically beneficial way.

Personally, for individuals who are single, male or female, I would suggest spending the increased cash flow on a red convertible.

Members of Congress and their supporters who touted the benefits of PPP and criticize the student loan forgiveness plan, do not understand economics or personal finance.  43 Million Americans have student loans and the average payment is about $5,000 annually.  Since only part of the student loan debt is going to be forgiven, let's conservatively assume 20 million Americans have another $5,000 to spend annually.  That's $100 Billion dollars being spent on American goods and services.  And that's just one year.

For those who think it is not fair tax payers, is it fair tax payers are paying off PPP loans to businesses when many are and will continue to be profitable and have the capacity to pay the loans back without government help?  Or is it fair, the cost of a college education has increased dramatically while the value of work has been devalued?

The student loan forgiveness plan not only is the right thing to do from a value of work perspective, I believe it will also have substantial benefits to our economy.