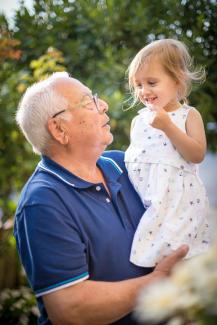 I got the opportunity to hang with two of my grandchildren when my son's wife was at a conference and I helped him with the little people while she was gone.  I live for these moments.

I had minimal responsibility with the little dude as he is crawling and getting ready to walk.  Since crawling babies eat everything they find, my main responsibility was to minimize the amount and size of food crumbs found on the floor.  I am pretty sure, when it comes to food crumbs on the floor, crawling babies have same laser eyesight of a hawk at 2,000 feet looking for prey.

My time with the 4-year old starts early as she is early riser.  Under normal conditions, so am I, but being on PT, the wake call shortly after 5:00 am CT was somewhat challenging.  Once awake, the fun starts.  We go downstairs to watch either a little kids movie or some other kid show.  Since she is totally bi-lingual in English and Spanish, and she watches her shows in Spanish,  Since I am barely literate in English and my high school Spanish was a long time-ago, I sit next to her and nod and laugh when she does.  For awhile I asked her to translate, but that was embarrassing for both of us.

Then I get her breakfast which normally starts with fruit followed by toast with jelly.  The conversation goes something like this.  Me, "do you want toast and jelly for breakfast".  Engrossed in the show, she ignores me until I hit the pause button, at which time she says yes.

I bring the toast with jelly nicely cut into four squares.  She looks at it and says she wants it cut into smaller pieces.  I say, "of course, your highness, I will get right on it."  Sarcasm is often wasted on 4-year olds.  I bring the toast, now cut up into small pieces and she says I want a fork.  I say, "I am so sorry my princess, I will get you one right away".  Back with a fork, she says she wants a smaller fork.  I say, "Naturally my future queen, a smaller fork is a much better choice for small pieces of toast".  I return with a smaller fork and say, "here you are my lady, will there be anything else right now".  She says no.  I than add, "may I say that purple, the color of royalty, looks especially good on you this morning".

After breakfast, the TV goes off and we play until the rest of the house gets up.  Mornings like this, be it with these or grandchildren or my other grandchildren who live in a different city are the best parts of my life.

But this time, there was a certain amount of sadness in the back of my mind.  I kept thinking of all the grandparents in Ukraine who loved being with their grandchildren.  At the beginning of this year, they like me were excited about spending time with their grandchildren, watching them grow, hopefully contributing to their growth and most of all simply being part of their lives.  Now in Ukraine, the lives of many of the grandchildren, grandparents, and parents in between, have been changed forever.  Some are refugees with their homes and communities destroyed.  Some are dead. Why?  Because of an evil dictator who decided to invade their country.

I have often wondered if the US somewhat complicit in making the war in the Ukraine possible.  It is no secret our former President and his followers were supporters of Russia's President Putin.  And the reverse was also true.  A March, 2021 report issued by the Intelligence Community stated President Vladimir Putin authorized "influence operations aimed at denigrating President Biden's candidacy and the Democratic Party, supporting Trump, undermining public confidence in the electoral process and exacerbating socio-political divisions in the U.S,"

Would Putin have been willing to initiate this war by attacking Ukraine without this support?  Who knows, it is impossible to prove or disprove a hypothetical.

Most every day, I receive emails from different financial sources regarding the economic and market consequences of the war in Ukraine.  None of emails talk about beautiful  grandchildren with their lives in front of them or doting loving grandparents.

For many reasons, we need to continue to support Ukraine in its efforts to end the Russian invasion and drive the invaders from their county.  If a dictator can invade a democratic country and get away with it, the dictator will not stop until stopped.  We also need to help all those who were displaced by the war,  Finally, for me going forward, I will reject any National politician who does not totally renounce the former President and his politics.

As a grandparent I will continue to treasure every moment with my grandchildren.  I will also hope and pray grandparents and grandchildren along their parents in the Ukraine who have been displaced by the War will soon be able to return to their homes and communities and begin to rebuild.