Protestant, Deist, Not Go to Church, Separation of Church and State 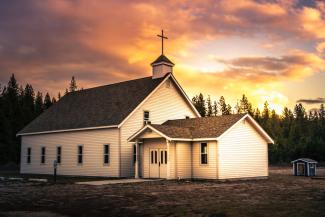 Protestant, Deist, Not Go to Church, Separation of Church and State

Since many in our country have been spending a lot of time lately talking about what the founding founders wanted and how we as a country should return to our roots.  Keep in mind, it is unlikely most of these people have actually taken an academic history course from this time period, not too mention passed one.  But whatever.

Recently a member of Congress and Trump supporter said “The church is supposed to direct the government. The government is not supposed to direct the church.  I’m tired of this separation of church and state junk.”  Would be fun to be a fly on the wall watching her explain her position to Thomas Jefferson or any of the founding fathers. Many of the founding fathers, though they may have belonged to a church, were also Deists.  Deists believe in one god, but their belief in one god comes from reason and logic.  Some historians believe Washington, Jefferson, Franklin, Madison and Monroe were all Deists or at least influenced by the principals of Deism.

Especially would be fun for the member of Congress explain this to Thomas Paine, also a Deist, who is most famous for writing "Common Sense" which was published in January, 1776 and was very influential in inspiring the Colonies to break from England.  Paine believed the objective of government was to serve people.  He also believed the new Nation should have a strong central government and a Constitution which protected individual freedoms including freedom of religion.

He also wrote "The Age of Reason"  which was published in 1794.  Paine believed in God, just not religions.  He said "Of all the tyrannies that affect mankind, tyranny in religion is the worst."  Wow.

Since this member of Congress is a woman, in the new Nation, she would not have been allowed to be in Congress, own property, or vote.  Getting an education for a woman at that time would have been very difficult.  Given her understanding, actually lack of understanding, of a founding principal of our country, the separation of church and state, it would be hard to argue she has an education today, at least in US history.

For the record, in the US Constitution, God is never mentioned.  When James Madison wrote the draft for the US Constitution, he left out any reference to God on purpose as he wanted to  establish a government which is separate from religion.  This was unique at this time in history.

But if the US is to become a theocracy, and follow our historical roots, then it is pretty obvious that the country should become one of the various denominations of Protestant which dominated all other religions at the time.  The Protestant Anglican church was the largest established church in the Colonies.  If we are looking to the time of the Revolutionary War as our guide on religion in the US today, then we should trust God at that time chose the best religion for us.  If fact, at the beginning of the Revolutionary War nine of the thirteen colonies provided funding for one or more of the Protestant dominations, so again, if God wants to become a theocracy, we need to become a Protestant theocracy.

But this is specifically why Madison and the founding fathers did not mention God in the Constitution.  They did not want any government support or endorsement of religion and for citizens to worship as they please including not go to church which was the choice of most in the Colonies at the time of the War.  There is a reason "Freedom of Religion is the first amendment in the Bill of Rights.  It separates church and state and protects all from the tyranny of a religion.

The reality is the majority of people in the Colonies, though familiar with religion, did not go to church.  According Rodney Stark, professor of sociology and comparative religion at the University of Washington, only about 17% of people in the Colonies attended church.  So does this mean that God does not want us to go to church?  A lot of that going around, so maybe we are just returning to our roots as a country.

So the question is if we are to go back to roots, do we become Protestant, or Deists, or not go to church.  Of course, Deists, not believing in organized religion, may or may not go to church so we could fulfill our mandate to be like our country at its beginning and still believe on one God.

Or we could look to the The Declaration which states that “all men are created equal, that they are endowed by their Creator with certain unalienable Rights, that among these are Life, Liberty and the pursuit of Happiness.”  The genius of this phrase at the time, 1776, is it appeals to those who belonged to a religion and the many more who did not go to church,  Some would argue its roots comes from Deists.  At that time, whether you belong to a church or no church, we are all equal to the Creator.

A final thought, this movement in the US to turn us into a theocracy goes against every principal of the founding fathers.  It is also a reason to not support any politician who is a Trump supporter.  Trump supporters, like the above mentioned member of Congress, are the most adamant of return to our religious roots.  But as outlined above, our religious roots are either Protestant or not going to church. What Trump supporters are really after is turning the US into theocracy.  All of us pf any faith or no faith cannot let this happen.