Public Education is an Essential Foundation of our Country 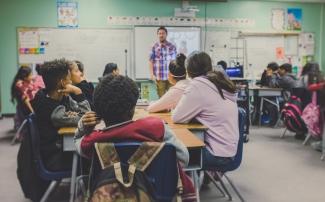 Public Education is an Essential Foundation of our Country

My mom could not come with as she was at home my little sister who was three at the time.  I was the fifth and my little sister was the sixth of six kids.  Yes, very unlikely we were planned.  Keep in mind, once the sun went down, probably not much to do on a small poor farm with no running water and coal furnace other than to make kids.  In addition to being a mother, my mom was doing farm work, we had chickens, a garden, and a couple of dairy cows.  She was also working on a college degree.  My father had died in a farming accident a year and a half earlier.  Three years later, in her early 40's she had her first teaching job in a small town in west-central Minnesota.

My mother understood and appreciated the value of education and she expected all of us to go to college which we did.   This was unheard of for poor farm families in NW Minnesota in the 1940s and '50s.

I was not a great student growing up.  I always lived in my older brother's shadow.  He was valedictorian of his class.  It took me ten times to spell valedictorian for this commentary, and that was using spell checker. Years later I was told I may have had ADD.  While in school, I was considered to be a PIA. But I did learn two things.

Whatever the career, plumber, college professor, software engineer, construction worker, a medical worker from technician to infectious disease scientist, and Certified Financial Planner®, education and learning in some form or another was required starting with kindergarten and quality teachers.  The only career that does not seem to require education or learning is being a Nationally elected leader as we have a whole lot of them who do know the difference between a pandemic and pane ku ken.

In addition to preparing for a career or often multiple careers, teachers provide history, culture, social skills, and language for their students, to name a few.  For example, as we all know, we have had a number of racial protests along with racial conversation this summer.  To have an informed and intelligent conversation about race in America, I believe one has to understand the history and absolute evil of slavery, Jim Crow laws, segregation, the Civil Rights movement in the 1960s, unequal treatment from some parts of law enforcement to racial minorities.  All of this comes from education and quality teachers.

Today we are in a challenging and often disheartening time period.  Education is one of the paths out of this.  At this time, it is important to understand public education has been a historical challenge for parts of the US, but the best of our forefathers understood education was the key to economic growth and public happiness.

We cannot cut taxes are way out of this.  In fact, politicians and their supporters who promote cutting taxes will further damage our economy and long-term economic prospects,

We can invest and educate our way out of this.  In the new normal, we need to look at education differently, but we have the technology and resources to do so.  Today, public education throughout the US, driven by independent and thoughtful academics needs to be seen as an investment in infrastructure, no different than investing in any other infrastructure. This will not only create good-paying jobs today but create a new generation of workers and citizens enhancing our long-term economic and social stability.