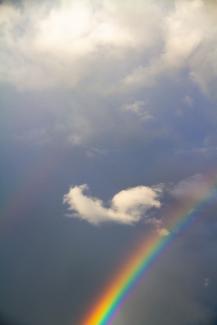 In a blog I wrote a couple of weeks ago, I said the coronavirus is going to roll through the world including the US. Sadly, this is true, and I expect things to get worse before they get better.  As we go through this difficult time together, I would suggest even though the storm is still raging, there are rainbows.

I have been riding my bike a lot in Tucson which has an amazing bicycling infrastructure including over 100 miles of paved walking/biking trails.  Last week, the first full week of schools being closed along with many businesses, there were lots of people on the trails.  What got my attention is almost all waved and smiled at me.  At first, I thought it was due to my rugged good looks.  However, since I have been often told, I do not have any rugged good looks, I quickly realized people of all ages and sized were going out of their way to be friendly and kind to each other.  There was even one mother with small children who clapped and cheered as I and other riders came by them.

This is a good thing and reminds all of us, there is no us and them.  There is just us.  Those who strive to make this pandemic an us versus them, are specifically and exactly wrong.  The us versus them crowd hamper our efforts to deal with this pandemic and even more important, plan for the next one.

When I have had to make supply runs, I take a moment to thank every worker I encounter for continuing to work during this difficult time.  I have seen many other shoppers doing the same.  All of us should be so doing for not only workers at stores, buy any health care worker we encounter.  It shows appreciation and makes their day better, but also each of us.  Being thankful is always a good thing.

Though social distancing is necessary in public, at home, unless one spouse or partner is sick, I suspect the opposite of social distancing will take place.  After all, one can only spend so much time watching TV or looking out the window. I expect there will be a substantial spike in birth rates in the next 9-11 months.  A friend of mine said the babies will be called "coronials" and when they become teenagers, they will be called "quarenteeners".

My generation, baby boomers, will likely not contribute to the spike in birth rates, however, just like in sports today, I suspect a lot of them will be earning "participation ribbons".

We are being given a very painful reminder ignorance is expensive, very very expensive.  But I hope and believe good will come out of this.

I have heard the most ignorant and least thoughtful of us refer to this pandemic as the China pandemic or the Boomer Doomer.  If you want to name it, I would suggest calling it the ignorant pandemic or the rainbow pandemic.

We will get through this and we have the opportunity to be better as a country because of it.  Actually we have to, there is no other choice and we will do so.