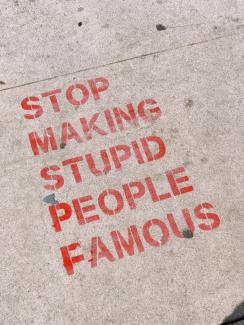 Years ago I was at a financial "conference"  at resort on the Pacific coast of Mexico.  A few were financial planners like myself, most were financial advisors.  And yes there is a difference, a very big difference.

Anyway we were on a relatively small boat on whale watching tour when one of the advisors asked the captain what was the current elevation.  The captain, genuinely surprised, said "sea level".  I could just see the captain, who was a native of Mexico, thinking how does this guy breathe regularly not to mention make a good living.

Well there is the story about the guy voted by his high school class as the least likely to succeed who showed up at the class reunion 20 years later the wealthiest of all of them, combined.  They asked how he did it.  He said he invented the widget and found he could make a widget for one dollar and sell them for four dollars. He then said anytime  you can make three percent on your money, you can do very well financially.

We all know people who are missing a few french fries in their happy meal.  And they have been part of our country since our beginning.  But they have never inspired our country to do great things.

Our founding fathers were very intelligent thoughtful educated individuals.  Some had formal educations, some self-educated, but educated just the same.  They read writings from the great Greek Philosophers.  They knew about the Magna Carta and the changes in England since its inception in 1215.  They knew about the Iroquois League of Nations and its "Great Law of Peace", the foundation of the League of Nations democracy.   In short, they established the US as an intelligent country which treasured education, knowledge, history and reasoned thought.  They set the bar for the US for years to come.

Need proof, the past few years members of the Congress have said the following:

All the above are examples of members of Congress whose row boat is missing at least one oar.  But what about the people who are electing them.

There have been multiple examples of individuals comparing a mask mandate to Nazi German. Let's the get this straight, a mask which can protect you and others is compared to one of the greatest tragedies in human history where six million jews were put to death in concentration camps during WWII.

Other examples of individuals who are two cards short of a full house include people continue to believe the Presidential election was rigged even thought there is no evidence this happened and overwhelming evidence to the contrary.   Some believe the January 6th Insurrection was actually a peaceful protest of liked minded people who  came together to enjoy special brownies.  For the record, it was an attack on our democracy.

In 2009 Susan Jacoby published "The Age of American Unreason".  It is about the increase of anti-rationale thought in the US along with the decrease of an informed citizenry.  It was scary to read then.  Even more scary to think about now.

Increasing diversity in our country is not something to fear, it will make us stronger.  The dumbing down of America should make all of us afraid.  If we do not reverse this trend, we will go from a global leader to an after-thought.